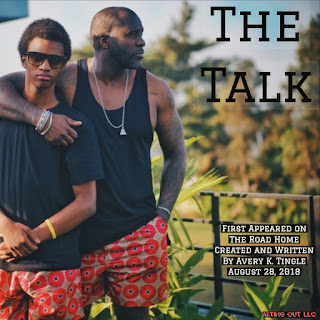 Turns out the most difficult conversation I would ever have to have with my son would not be about sex, but the color of his skin.

My son came into my room two days ago. He didn't say anything. He just bent down and gave me a hug. His heart was beating so fast and hard that I could feel it in my chest. I asked him if everything was okay, he nodded. Pressing a bit, I asked if someone he knew had died. He's a teenager. They rarely give up the right answer on the first ask. Blessedly, he shook his head.

When he finally did pull away, he showed me his phone. This is what I saw. 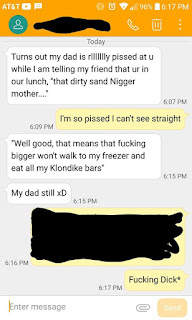 This was a rage I know all too well.
A little context. I've had custody of my son for the past five years. He came from two very broken homes and was almost feral when he came to live with us. He didn't know how to act and quickly became unwelcome in certain homes. This was four years ago. He's a very different person now, one who gets A's and B's (most days) in school and doesn't (often) have to be hounded about his chores.

If living in this era has taught us anything, it is that hate is as much a part of the human existence as love is. One of the most painful things I've ever had to tell my son is that no matter his accomplishments, or how far he goes in life, there are some people in this world who will hate him simply because he exists. This hate will be compounded if he dares succeed beyond them.

No, it's not fair.
No, it's not right.
No, I don't know why it has to be this way. I wish things were better. I wish the world wasn't like this. But here we are.

Another harsh reality I had to shed was that someone walking up to him and saying this word to him was legal. As much as some of us don't want it to be, once you start picking away at the First Amendment, there may be no stopping it.

While calling someone the ugliest word in the English language is legal, a physical reaction is not.
Often this word is used as bait, because once you start swinging, you've committed a crime and they're quick to put you through the legal system because they can.
So I told my son to do something I never had the strength to do. When someone walks up to him, looks him in the face, and calls him that name, swallow your anger. Take a step back, turn around, and walk away.

They may follow. Let them. Walk away.
If they spit on you, or they dare put their hands on you, do what you have to do.

I don't know if we'll ever arrive at a place where that word doesn't mean anything, or if hate has no power. While we have to deal with hatred, we can control how we react to it.

We owe it to ourselves and our kids to set the right example.