Can We Start Over? 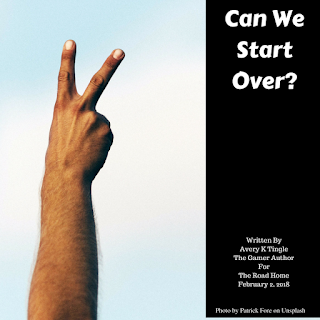 Hi.
I'm Avery.
I've made some grave mistakes lately that I'd like to atone for.

I am no fan of the current administration and I don't see that changing anytime soon. But in my zeal to speak out against it, I've allowed my anger to get the better of me. I've gone after people to ridicule them. I've put things on the net I can't take back. I could hardly be called a unifier.

To make matters worse, I've boasted that I don't want to be. Let those who continue to be complicit be scorned and ridiculed as they deserve! We'll drag them into the better future whether they like it not.

Yeah, not the best persona, I admit.

We are the United States of America and we share the planet with a few billion other people. Nothing is going to change that. So whether any of us like it or not, we're going to have to learn to co-exist. As someone who has made himself part of the problem, I'd like to apologize for my actions.

I'm sorry.
I mean that.
I have been wrong.
I may be wrong again, but I will certainly do my best to keep from doing it as often as I have.

That said, maybe if I tell you, openly and honestly, how I feel and where I'm coming from, we can start a dialogue.

I am afraid of the conservative mind. I have let this fear devolve into something close to hatred.
I am automatically distrustful of anyone who starts singing Trump's praises. I (impulsively and often erroneously) assume that if they are praising Trump, they want to see people like me deported, enslaved, or dead. I assume they force their wives to be barefoot and pregnant. I assume they spend their spare time shooting up the sky.

I have been racially accosted by people who believed these things. So has my family.

Choice.
The pinnacle of my argument, and why I rail so hard against the administration, is because I feel that in the end they are about the revocation of choice. Of basic human rights.

Courtland Sykes stated that he expected to come home to dinner every night and blasted the feminist movement along the way.
If this is what his wife wants for him, great, more power to him. Where I become apprehensive is when lawmakers attempt to make this the law of the land.

I grew up in an affluent black household, where dinner was expected on the table precisely at the same time each night, or violence ensued. My mother was rarely given a choice. It's a horrifying thing for a child to watch, and it stays with you forever.

Courtland Sykes alludes to as a woman, you must do this.
The feminist movement says as a woman, you can do anything.
That's why I support the latter and battle against people like Sykes.

Guns.
The age-old, endless, and some would say unresolvable debate.
I don't like guns. I grew up around them, I don't see them as toys, I don't think they're fun.
But that's just me.
If you're still reading, I'd like to let you in on a little secret.
No one's coming for your guns.

They've been shilling that line since the eighties. It's a lie, meant to drum up fear and get everyone to purchase, yes, more guns. Meanwhile, I promise you, the NRA is laughing it's collective ass off and they should be.
People who wield guns so zealously scare the hell out of me because I believe they are looking to use it. They are looking to be the good guy with a gun, eager to put down the bad guy with a gun. The idea that we could all become so desensitized to the idea of personally taking a life should horrify all of us.

Please understand; it is no small thing to take a life. It is not easily shrugged off or forgotten.
And if it has become so, we should all take a collective look in the mirror to try to understand how we have arrived here.

I have been both shot and shot at. I have lost more than one friend to gun violence. I'm acutely aware of how devestating a few seconds of violent action can be.

Guns aren't going anywhere, whether any of us like it or not. Instead I propose we harshly sentence those who use a gun in the commission of a crime.
Example; rob somebody at gunpoint? Automatic ten years.
I propose we teach firearm safety in every public middle school in America.  Because maybe if we teach children to respect the gun, they'll be less inclined to use one violently later in life.

And when a kid takes a gun and shoots up a school? I don't know. But I suggest we look at the parents.

I don't have all the answers, but I know I'm tired of being angry and watching my back. I want to have the uncomfortable conversations that we may either have peace, go our seperate ways, or both.

I have been wrong, but I'll be better.

Can we do this together?

Hey everyone! Thanks for reading to the end. When I'm not trying to make the world a better place for everyone I write things. I write things like The Anniversary, a science-fiction romance most people seem to like and for only a buck, you can't go wrong.
Tell you what. I'm writing my first big book and I'm trying to get people interested in my writing, so if you jump on my mailing list, I'll give you a copy of the Anniversary for free. Just let me know what format you'd like.