October 19, 2017
I learned an important lesson about racism yesterday. 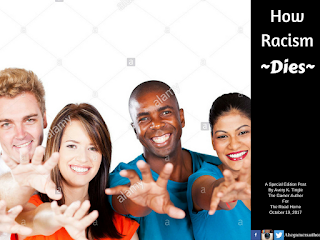 For context: I'm one of maybe two or three black people who work here.

So yesterday, when a friend of mine showed me an apple pie facsimile made entirely of ritz saltines and tartar (?!) my first, natural reaction was "Wouldn't that be a Cracker Pie?"

Several seconds of stone silence gave way to uproarious laughter as I considered packing my desk and saving HR the trouble.
They were really laughing, though, even as I was trying to backpedal my way out of it. Finally, the guy who showed me the recipe (?!) in the first place said "Dude, no, it's good. Don't even worry about it."

I have to admit; I felt kind of stupid after that.

This morning, it hit me. I know it may not seem like it because the loud, ignorant people have the microphone, but if you look closely at world events, it can be argued that racism, one of the stupidest and ugliest concepts to curse the human race may be dying.

The fact is, far, far fewer people care about skin color than they do about whether or not you'd choke a puppy. The idea that someone would hate someone else based solely on their ethnicity is so stupid that it's literally becoming a joke.

That's how you beat it. Not with audacity or violence, but with HUMOR. We're at a pivotal time in history, where the forces who would encourage this are feeling momentarily emboldened and justified by a set of rights that has yet to figure out how to outlaw them.

If there was ever a chance for the intelligent of us to show up as one and drive them back into the shadows, this is it. Because racism IS so stupid it can be funny, and maybe by showing those who refuse to change just how stupid they are, we can be rid of this disease once and for all.
We've decided to permanently call that recipe (?!) Cracker Pie just so you know.

emaginette said…
I think it is getting better all the time. I look back at what was socially acceptable in movies ten years back or more. I'm appalled. Behavior is changing and each generation is that much better for it.