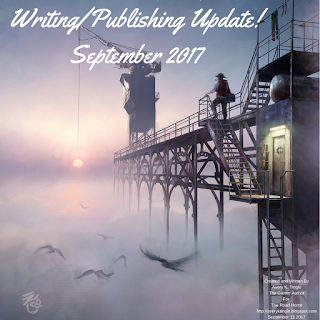 I know, I haven't done one of these in ages. I think my last one was more than a year ago.

The number one question I get from both friends and fans is are you ever going to re-release your books?

I confess that I fell into a trap after Era of the Scourge: The Ring of Asarra, The Anniversary, and Era of the Scourge: Reclamation. Those titles did better than I was expecting and I got arrogant. I figured I could market those stories forever and not have to worry about anything else.

Yes, I'm an idiot, I know. But the good news is that I learn from my mistakes.

I've decided to take all of the lessons learned over the past two years and turn them into something I hope you'll love. I'm writing two one-hundred thousand word novels over the next three months because I just didn't have enough stress in my life.

Era of the Scourge: Reclamation and The Ring of Asarra are being retconned into the current universe, which begins with Era of the Scourge: Avelith. For those of you who've been following me for awhile, Era of the Scourge (think Star Wars meets Lord of the Rings meets Game of Thrones meets Street Fighter 2) is a prequel to Universal Warrior, and they all take place in the same universe at different times.

Avelith, the first official main story in the Era of the Scourge series, takes place early in our world's history when our planet was ruled by the original four horsemen of the apocalypse. Cut off from the Haevens in the First Dimension, twin sisters attempt a harrowing journey through the wildlands of Panagaea to seek help and find themselves embroiled in a civil war between ex-slaves known as the Fatherless and an impossible enemy.

Agoura Hills is about as far outside my comfort zone as it gets. I've written (and tossed) three drafts before I realized what the story was really about. Based on a true story, Agoura Hills (Supernatural YA Mystery Thriller) follows Chance Bailey and Celia Youngblood-Dobson as they race the clock and other forces as they attempt to unravel the mystery of what's been taking people from the nearby national park. First of a trilogy.

In the meantime, my other stories; Run, The Anniversary, The Appraiser, and anything else I have out there not connected to Era of the Scourge will be given away to new newsletter subscribers.

Kim M. Watt said…
Wow - that IS ambitious! But I'm cheering you on loudly while giving my WIP side eye. I'm currently shopping Book One of a trilogy around agents in the hope that someone likes it, while Book Two and Three are asking when I'm going to get to them. The answer to that is soon. Honest.
September 13, 2017 at 2:16 PM