September 25, 2017
I love writing by hand, and I love notebooks. I'll often devote entire budgets to them and when Officemax has one of their twenty-five cent sales, I'll buy them out. I often draft by hand, finding that the scene comes together more purely when it flows from a pen rather than a keyboard.

So when DailyDot advertised a durable new type of notebook that you could use over and over again for the cheap price of twenty-five (thirty after shipping) US Dollars? I'm down. 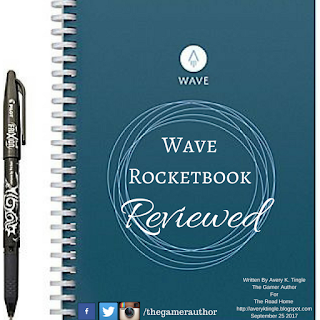 The Wave Rocketbook is meant to be elegant in its design and simple in its execution. The instructions come on the bag itself, and only the pen and notebook are included. The pen feels like any other, so you have to be careful not to mix it into your collection or you will end up marking your notebook with the wrong pen (like I did). The ink is erasable, which is a bonus. A place to put the pen would've been nice, but it clips easily, if not securely, into the ringed binding.

The paper is thick and durable, not easily torn. I tend to be brutal with my writing instruments and I have yet to do any damage to the paper. That alone almost makes it worth the selling price. At the bottom of each page is a QR code meant to number pages in bulk upload. I haven't tried this feature yet but there are serious issues that come with native syncing, which brings me to my next point.

Accompanying the notebook is a free app you can get for both Android and Apple, and this is where the Rocketbook falls a little short.

At the bottom of each page are seven symbols. In the app, you can designate each symbol to correspond to the app of your choice, which means you should be able to auto-send notes to Evernote (a personal favorite), Onedrive, Gmail, and others. Simply mark one of the seven symbols, scan the page, and the app should handle the rest.

It took one week of trial and error before the damn thing started auto-sending to Evernote. Blessedly, you can use Android's native share feature to send scanned notes to the app of your choice, or if you're like me, you can use Evernote's scanner to upload your notes directly into the notebook of your choice. Considering that this is supposed to be one of Wave's key features,  poor execution makes this a letdown. I finally had to draw hard asterisks in the symbol I'd designated for Evernote before the scanner finally auto-uploaded. Now that I know how it works, I'll use it, but using the old-school share button works just as well.

Another key feature of the Wave notebook, and the main reason why I bought it was the idea that I could microwave the thing (wow) and use it over and over and over again. So day one, I drew some squiggles and threw it in the nuke machine for twenty seconds at a time, per the instructions.

As you can imagine, this makes the notebook really, really hot. It took about a minute to completely erase my first notes and even when it did, ghost lines were left over. The site's FAQ warns you this will happen, but my OCD didn't like the idea of not having completely clean sheets to work on. I got over that pretty quickly.

I've since filled four of forty pages, and I imagine it may take me a month or so before I need to nuke it again. This means I'll get approximately half a year's use out of this thing before I need more.

Remove the unpolished gimmicks and thirty bucks will get you a durable notebook that should last you a good long while, depending on your usage. Future updates should include making auto-uploading simpler by being able to place checkmarks over symbols and a dedicated pen holster. As a novelty item or a gift for the writer in your life, this is a good purchase.

This is not worth a cent more than thirty dollars as is, though. As with most new things, some refinement is in order before a higher asking price can be justified. Overall, I'm satisfied with this and may buy another one, but I can't see abandoning my traditional notebooks for this one altogether yet.

Kim M. Watt said…
Interesting! I love first drafting by hand - less distractions plus for some reason the words seem to flow better. I'm a fan of cheap, scratchy pens and cheap notebooks, though, so something this pricey would have to be pretty good to win me over ;)
September 28, 2017 at 12:14 PM

centime said…
Wow—very interesting. I have a notebook I have yet to try that someone gave me. It allows me to handwrite, mail it back, and then get the writing in a word document. My issue is that I love to erase and I constantly revise. I will have to check this out. Thanks!
September 29, 2017 at 5:25 AM

Lynda Dietz said…
I love the speed of typing on my keyboard because I feel it helps my thought flow (when the words are actually flowing). That said, I still revert to regular 25-cent paper notebooks when I want to compare things, or if I'm working in multiple docs at once.
September 30, 2017 at 6:52 AM

Unknown said…
I'm sure this will get better as time moves on-- and I'd definitely buy an updated version.

Indywrites said…
This an interesting concept, never knew such a thing existed! I could get used to this one.
October 3, 2017 at 1:28 AM