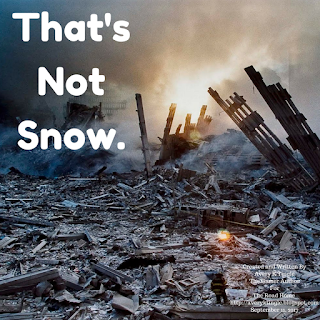 I have to see it.
I looked my friend/guide in the eye and spoke with more ego and bravado than the situation warranted. He immediately shook his head, his eyes going wide and somber. No, he said, no one goes there. Dude, no one is supposed to go there. Not even the hustlers go there. He paused and said, that's hallowed ground.

I didn't care. I browbeat him into taking me, even threatening to abandon the fight I was there for if he didn't.

It took us about ten minutes to get there in the dead of night. The stars peeked out between the other skyscrapers, but dimmed as we drew close. We shared the streets with quiet souls moving in the opposite direction. Those who took our path did so with their heads down and no sense of excitement.
When we reached the site, the crime scene tape had been eradicated by those who came before us. My friend/guide stopped at the base of the grotesque cemetery; I'm not going up there, he said, you wanna do this, you're on your own.

I thought he was a coward.

I climbed up the hill of shattered glass, girders, and stone, giving no thought to what I was truly stepping in. As I ascended I found I wasn't alone; others were there, chattering amongst themselves as they retrieved debris and examined it with varying degrees of anger. Like me, they just wanted to see.
I reached the top of the incline and stared into a howling oblivion that went on forever. It was a gaping hole that tore into the planet itself and channeled an ethereal wind borne of those still trapped down there, in a sense. They'd had plans that day, of what we'll never know. None of them' imagined they'd end up the victim of someone's fanatacism.

I couldn't take another step forward once I reached the apex. Peering into the abyss was a bad idea. The pull of the angry was a cold wind, both pushing and pulling me, demanding I join them to pay for trespassing.

I squatted. I don't remember if I took my glove off.

I dipped my hand into the ground and pulled back cold, gray, fine dust. Instinctively I let it run through my fingers, thinking how unseasonably cold it was.
It snowed. I said, It hasn't melted yet.
My friend/guide appeared like an apparition behind me. I wasn't aware of his presence until his spoke, his words resonating through the ages.
That's not snow.
Shock and horror hit me like an ice wave as the gravity of where I stood, and what had happened, hit me. I tilted my hand and let the last of the victims pass from me. We turned, left, and allowed an hour to pass before we spoke another word. I didn't look back. 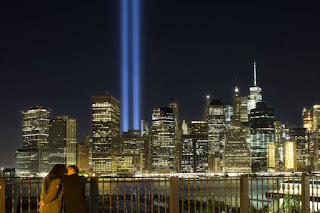 Fifteen years later I can still hear the howling.
Some say America's innocence was lost that day, when planes flew into the towers and destroyed our illusion of invincibility. I remember firefighters, police, volunteers, and others who didn't care about color, political affiliation or creed coming together to save who could be saved and mourn those we lost.

That's what I choose to remember today. I am looking forward to the day that it does not take unspeakable tragedy to make us realize what really matters; that we are all in this together, that we are better and stronger together, and that our unity is our greatest asset and our enemies greatest bane.

Brandon Ax said…
Powerful stuff. I don't think anyone alive at that time old enough to know what was happening will forget that day and what they were doing.
September 14, 2017 at 4:38 PM