What Donald Trump Has Taught Us. 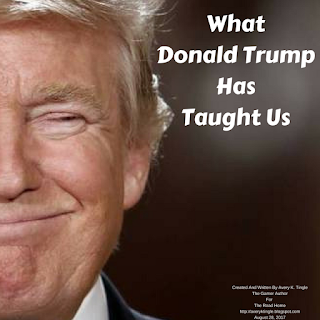 It's been a tumultuous seven months. Our President has played chicken with North Korea, banned
transgender people from service in the military despite campaign promises to protect them, and most recently pardoned America's favorite sheriff.

But these past seven months have also been incredibly educational. In Donald Trump, we have come to realize how truly free we are.

We have the right to pretty much do whatever we want.
We can refuse to bake cakes for those who disagree with our religious affiliations.
We can kneel down to protest the treatment of black people in America by law enforcement.
We can march, bearing the most abhorrent symbols and chant the most disgusting slogans.
We can call anything we want a fact.

Know what else we can do?
We can use the collective power of our voice and finances to drive those who use religious persecution as a tool out of business.
We can support (and speak out against) those speaking out against the mistreatment of people in this country by law enforcement.
We can gather our numbers and march back against those who spew hate and hide behind the first amendment to do so.
We can cease trying to convince those who will not be convinced and hold our own facts to be true.

And when the President of the United States continues to take action that directly undermines American safety...
When he speaks falsehoods over and over again...
When a growing number of us realize that his bigotry is fact...
We have the right to band together and demand he be ousted from office.

We have the right to say and do pretty much what we want, within reason. We also bear responsibility for these rights. People do not have to agree with us. They are not bound to support us or share our views. They are not required to share our passions.

But each of us must learn to accept the right of every human being to live and prosper so long as it does not oppress or bring deliberate harm to one another.

When it does, we have the right to defend ourselves.

Indywrites said…
He sure has shed light on so much negativity. Hope all this leads to a better, brighter world and USA.
I liked the way you wrote this. :)
September 2, 2017 at 5:38 AM