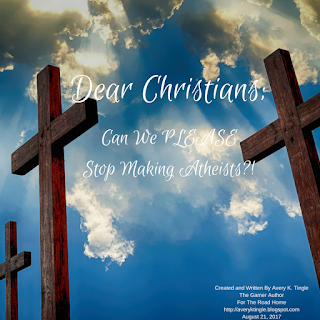 Last week, Yahoo ran a story that you either found beautiful, offensive or were indifferent to.
Great Britain celebrated what was widely believed to be its first interfaith lesbian marriage.

In what should have been celebrated as a joyous and monumentous occasion, Kalavati Mistry and Miriam Jefferson finally found a priest willing to marry them after falling in love twenty years ago.

But the internet is the internet, and we all know that we can't have nice things on the internet.
One of the first comments is this kindly and completely unnecessary little tidbit; 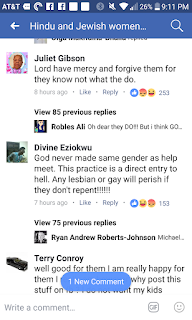 You know what the really sad thing is? There are tons of people who want to know what the big deal with God is, who would happily listen to someone who wouldn't act like a holier-than-thou douchebag.
Because the fact is, God doesn't make much sense on paper. This omnipotent being suddenly willed all of this into existence and appears content to watch us destroy ourselves, over and over? It's easy to see why people are so dismissive, especially as they appear more geared to taking control over their own destinies.

The fact is, no one is more responsible for turning people away from Christianity than Christians themselves. This has to stop.

So I'm gonna tell you some things you might not expect a Christian to say.

Half the time, we have no idea what's going on.
For some reason, we're absolutely horrified of telling someone we don't know. But the truth is, God will never be proven in life. The entire point of faith is to put trust in something you can't see or prove. That is what Christians choose to do. Despite evidence to the contrary, we believe that God created the Heavens and the Earth, sent His son Jesus Christ to die for us, and that Jesus rose from the grave three days later. I know, it's a lot to take on faith, but it'ss what we choose to believe. Most of the time, we pray, He talks to us in a way that will make us sit up and listen, and then we go with it. We often don't know how things are going to work until we get there.

We do not have an "Inside Track" to God.
We are not, I repeat, are not fit to tell anyone that they're going to hell. As far as God is concerned, we're all messed up. No one is better than the other. That was the point of Jesus' life and sacrifice. So whens someone comes out and publicly (and arrogantly) asks forgiveness on behalf of someone else, that person is usually full of shit. We're rolling the dice in life just like everyone else. We believe and hope we'll live a life worthy of gaining entry to Heaven in the next life, but God intercedes on our own behalf and judges each of us on our own merits.

If someone asks me about God, I'll do the best I can to tell them my truth; how I came to believe (again) and the road that led me to this point. That's what our duty is as Christians; we spread the gospel to the best of our ability when someone comes to us. We greet them as brothers, sisters, equal under the Lord. We leave the scorn, ridicule, and face-punch-worthy condemnation at home because none of us are worthier than the other in God's eyes, no matter what our ego tells us.

So maybe, just maybe, if we begin to approach each other as lost souls trying to get by in this planet instead of trying to do God's work for Him (WE CAN'T DO THAT!) maybe we can see a positive shift in the world. Because right now, we're doing more harm than good and in order to turn that around, we must accept responsibility for our own shortcomings.

None of us are perfect. Most of us are trying. Most of us need help Most of us will accept help if offered graciously and without condemnation. We're all beating ourselves up enough over what we've done wrong. We don't need help from the zealously religious to make it worse.

John Pavolitz said this better than I did.

God bless and be safe.

Greatly enjoying his status as a "Rogue Christian", Avery K. Tingle "The Gamer Author" is a survivor of child and domestic abuse. The author of scifi romance The Anniversary, he is currently writing two 100k word novels that he's determined to have done by the end of 2017. He lives in Eastern Washington with his wife and son and loves his day job in IT.