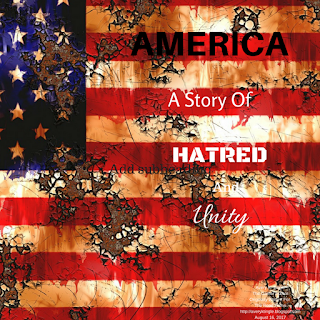 I wanted fast food tonight. That was all.

I found myself at Burger King to pick up my wife's order. I was a few cars deep when I spotted the Confederate flag. I surreptitiously snapped a few photos. This was going to be a very different story.

When I pull out of Burger King, it turns out there's more than one. In fact, there are four trucks, each flying variations of the flag. I have to go around the front of them to avoid an accident. They're parked right in the middle of the road. As I drive around them, each person in the vehicle makes it a point to ensure I see them. I do. They see me too. 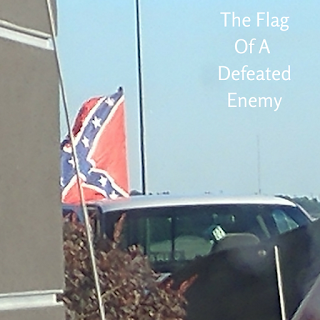 When I get to McDonald's (which is in the same lot), I learn that they're not taking debit cards at the moment. Terrific. I wanted chicken nuggets and instead, I get a run-in with the new Confederacy.

So I make my way back to Burger King, again appearing in full view of the trucks. I place my order, get it, pay, and pull out.

Then one of the trucks accelerates into my path. I throw in the brakes to avoid an accident.

And stay in the car.

The driver who nearly rammed me could be about my age. He's balding, beard, horribly overweight, and coming right at me. When he takes his third step towards me, I get out of the car and start sizing him up. Instincts I haven't drawn on in years begin to fire up, coupled with the uncomfortable, frightening reality that I have a family that I'm suddenly desperate to see again.

I repress the latter emotions as the man points at me and says; "Do you know who's in the White House right now, boy?"

My world turns red. Racial slurs trigger me. I am praying, asking God to forgive me for what I'm about to do, praying I see my wife and son again and hoping they can forgive me too.

The driver is then joined by four more people; three males and one female. None of them look like they take care of themselves physically. My mind starts to process. If they're armed, I can snatch the big guy and use him as a shield, maybe get through two of them before they take me out. Maybe.

Another set of doors close behind me and it's an effort not to give into terror. One word flashes through my head; surrounded.

I chance a glance behind me and it's not more of the Confederacy I see; it's a Hispanic family. Actually, it looks like all of the Hispanic families.

I have to stress; I didn't know these people. There were eight of them, and they weren't looking at me. One of them was younger and smaller than my son. The patriarch's eyes were red and on fire. The women were clenching and unclenching their fists.

Suddenly the Confederacy is not eager to proceed.

I find myself flanked by this family and the father begins to, I assume, cuss these people out in Spanish. I heard the words madre and muerte thrown around. I imagined the guy threatened to kill him and his entire family.

I actually smiled, suddenly much happier about my odds. I wasn't alone. Armed or not, this was a fair fight. And if God chose this night to call me home, dammit, some of them were coming with me.

But that didn't happen. The Confederates hurled a few more slurs our way and then drove away. I watched them go, ensuring I wouldn't be followed home.

The patriarch turned to me and offered his hand. In exceptionally broken English he asked; "You okay?"

"Yeah." I lie, accepting his hand, "Yeah, I'm fine. Gracias."
He shakes my hand and grasps it with both hands. He looks at me with fierce, unblinking brown eyes for a brief, fleeting moment, he and I are brothers. "De nada."
He and his family take their leave. I have a story to tell my wife that's going to piss her right off.

This isn't in DC, Charlottesville, or even in the Bible Belt; this is in Washington state. Someone racially accosted, might very well have been ready to risk his life to fight me, invoked the name of President of the United States because he thought he was justified!

Didn't know me, didn't know anything about me but was ready to come at me because I am black, and he feels vindicated in his hatred.

This is the first time the administration has hit me on my front door.

We fought wars. People died to stamp out Naziism and the Confederacy. Unless every last one of us who disagrees with this idiotic mentality comes together, they will do it again.

Right here, right now, we need to put aside our disagreements because there is only one enemy here, and the enemy is emboldened, gaining ground, and marching.

Conservatives and Liberals can agree that hate cannot stand. It's time for the two sides to come together to destroy our common enemy so we can go back to arguing as to how to make our country a better place again.

God bless you, and thanks for reading.

PS: Just because it doesn't happen to you doesn't mean it isn't a problem for someone else. That's what privilege is.

J. M. Strother said…
Wow. I am so glad that situation did not come to actual physical violence. Those were exceptionally good people who stood up beside you. My thoughts are with you.
~jon
August 16, 2017 at 9:11 PM

Rachael said…
Oh my god, terrifying. Very glad you made it out of that safely. It's scary to think people with that mentality live soo close by. We live by Wenatchee high school and I've seen the old truck with that flag on it. I know neanderthals like these have always been around but 45 has really emboldened them. My kids are a mix of Native American and Mexican as are their cousins. My 8yr old nephew got a taste this on his way home from school soon after 45 was in office. He was told that the new president would hate him because he was Native and Mexican. The only way we will get through this nightmare is if we stand together against it. Again very glad you made it through that.
August 17, 2017 at 9:03 PM

Unknown said…
A friend posted your blog post on FB. I'm outraged this happened to you. I'm a refugee from the South, living in Washington state, where I had assumed this stuff didn't happen. Makes me ashamed to be white, but I needed to hear it. Thank you.
August 18, 2017 at 11:42 AM

Karen (formerly kcinnova) said…
I live in Eastern WA and am shaking in anger that this happened to you, thanking God that people were there who had your back (literally), and nodding in agreement with your thoughts.
August 18, 2017 at 9:52 PM

Anonymous said…
I'm so very sorry this happened to you! I'm so glad you're okay and that you lived to write this very important piece.