Three Lessons Learned From Self-Destruction (Why I Pulled My Titles) 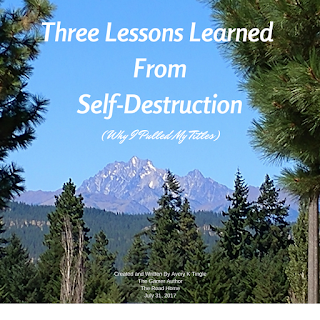 Hello there! This is way later in the day than I intended. I just got home from a two-day vacation in Seattle; while the wife went to the Seahawks training camp, I threw a bag over my shoulder and got back to my roots. I really forgot how nomadic I am, and how refreshing it is to have the ground under your feet with no idea where you're going. I still believe that the best things in life happen by accident, and I explored parts of Seattle I hadn't seen before. I'll have photos up on my Instagram and Facebook within the next couple of days.

So come back with me one year. I'd finally done it. After all the planning, pantsing, panicking and pontificating, I finally self-published my first novel to Amazon, Kobo, and Barnes and Noble. It was called Era of the Scourge: Reclamation. It took place sometime before Era of the Scourge: The Ring of Asarra, but I never really cleared up the timeline (mistake one).

Then something amazing happened. A week later (I hadn't checked my sales yet), a friend of mine got in touch with the headline; "Someone's doing well for themselves." She had forwarded me a copy of Amazon's scifi/fantasy newsletter.

Reclamation was right at the top, in new and exciting reads.

I literally fell over in my chair.

It didn't stop there. Reclamation took off on Kobo, so much so that they were using it to advertise the platform.


And right about here is where the self-destruction kicked in.
I added a subplot to Reclamation one week before I released it and people liked it. When you've heard failure loser never-gonna-be-anything literally all of your life, that's what you come to believe about yourself.
I had two days where I moved no units and suddenly I was freaking out.
I looked back over everything I had out at the moment; a few shorts, an audio production, and I decided that my dad and detractors were right. I was crap. People were starting to realize that. So I took everything down before the world could realize I was a fraud and phony.

People started emailing me that week as to why they couldn't find this title and I realized; I'd made a mistake. I wasn't ready to confront the idea that just maybe, I was good at being an author, but maybe I didn't suck as bad as I'd been led to believe.

There are three things I took from the experience;

1). Everyone Suffers From Imposter Syndrome.
There isn't a creative alive that doesn't believe they suck. No one, from Stephen King to J.K. Rowling to R.J. Blain, believes they aren't a giant fraud ripping people off. I'm not special in that regard and neither are you. The successful ones are the ones who drown out the noise in their mind and power through. I'm on the final drafts of two novels, each over ninety thousand words, and I've at last learned to tune out that monster.

2). Respect The Craft.
Self-publishing comes easy for me. I don't have that fear of pushing Publish. I look forward to it because it's scary as hell and each time I do, I stab that self-doubt monster right in its black heart. I can also generate quality content at a high rate when I put my head on it.
But I left a lot of meat on the bone when it came to Reclamation. I still wasn't satisfied when the deadline rolled around. I felt backed into a corner (of my own making) and I wasn't smart or humble enough to buy more time so I could tell the story correctly.
Loving the craft--and the business--doesn't mean you should take it for granted. I never announce deadlines anymore. I sparsely release information on my novels. I am taking them time to tell the stories as they should be told so when I do publish them, it's all out there.

3). Just Because No One's Reviewing...
Let's be straight. Reviews are hard to come by. I didn't seem to need them; people were buying my stories in droves. I wasn't getting any reviews so I figured it was the friends/family/intro bump, but then complete strangers were tracking down my social media and telling me how much they loved the story. I had no idea what to do with that. I mean, if they're not taking the time to review, then they're just telling me what I want to hear, right?
Is it apparent yet that I suffer from a tremendous streak of self-destructiveness?
If people are spending their money on your work, that's huge. There are people who won't spend money on health insurance but they'll buy your work. Track them down, if they don't find you first. Thank them for their efforts. Get them onto your mailing list. Reviews may be hard to come by, but a lack of reviews does not indicate a lack of interest.

That latest bit of self-destructiveness I put myself through was the last. I have taken concrete steps to ensure that that doesn't happen again, though I'm sure there are a million other demons for me to slay. I hope that by reading this it saves you from making my mistake. You're far better than you allow yourself to believe. See your craft through. May you find success in your endeavor.

Unknown said…
Thank you for sharing your experience. I'm getting close to self-pubbing my first novella and I've found myself procrastinating doing some essential things in order to be able to actually sell the thing. I think it's just what you said -- imposter syndrome. Despite being told that the story is good (and, in fact, being encouraged to self pub it by a successful self-published author whom I trust and respect), I find myself questioning whether this is a good idea, whether people will like it, I'm sure it/I am going to fail, etc. So, I think I needed this to help push me past my own self-sabotaging behaviors in order to be able do do something I've dreamed about since I was a kid -- have a book out there with my name on the cover.
August 1, 2017 at 9:09 AM

Avery K. Tingle said…
I'm glad I could help. Now watch; you'll self-publish and it'll do a lot better than you expected, and you won't freak out and yank it down after one bad day.
Good luck.
August 1, 2017 at 10:55 AM