An Open Letter To All Good Police Officers 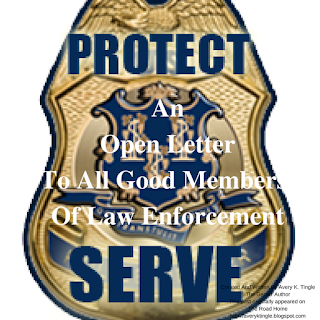 Thank you for the service you provide. It's no small thing to risk your life every day to keep our civilization intact, especially when it seems like half the world is calling for you to resign or worse. Please know that your efforts are appreciated.

I am a black man living in rural America, and I know there are good police officers out there. Some of them cut me breaks when I was a kid and some of them live in my neighborhood now. I've had more positive experiences with police than negative ones.

The murder of Philando Castile is deeply disturbing on many levels. This was a man who had never committed a crime in his life. In the span of forty seconds, he'd gone from a standard pullover to violent statistic. In the span of forty seconds, Officer Jeronimo Yanez went from addressing a broken taillight to firing seven rounds into a vehicle that also carried a four-year-old girl.

My question is this; if a person of color can legally own and operate a firearm and still lose his life at the hands of those sworn to serve and protect, where does that leave us?

Officers, I am scared. I admit it. Whenever I'm pulled over, I immediately put my hands outside the door just to diffuse any possibility of aggression. I always inform the officer that I'm not armed and that my driver's license is in my back pocket. I ask permission before I reach for it. Do I want to take these steps? No, and I shouldn't have too, but I have a family I want to get home too. (Blessedly, all members of law enforcement in my county where bodycams).

I worked a long time to get my life together and I am scared of losing it because the wrong officer sees me as large, brown, and a threat.

It should not be this way.

What really frightens me is this; as tensions are unusually high between brown citizens and police, one day, someone is going to fight back. It will all be recorded, too. An officer is going to make an erroneous assumption and the victim is going to successfully defend themselves.
Or worse, it will be assumed that an officer trying to do their job will be aggressive, resulting in pre-emptive action. If you think things are bad now...

None of us want this; not us, not you. I'm asking every decent member of law enforcement to please, for the sake of everyone involved, stop and think before reaching for your firearm. Your aim is to protect and serve, and a lot of us feel as though we are being hunted.

I also ask that decent police renounce actions such as Officer Yanez's. That you stand together and publicly vow to do whatever is in your power to reduce the chances of events like this happening.

At the end of the day, I promise; we all just want to go home. So let's get there together.

Unknown said…
I have friends on both sides of this divide that I would be devastated if they were hurt or killed. It seems like so much of the rhetoric coming out of politics (on all sides) is based in fear, is it any wonder that people are angry and afraid?

So many tragic situations could be avoided. Not just by talking, but by LISTENING. By honestly hearing the other guy's perspective and applying some empathy. If people would say to themselves "How would I feel in this person's place" and be honest about those feelings, then move forward accordingly, this would be a much kinder, less toxic society.
June 24, 2017 at 7:20 PM

Unknown said…
I have friends on both sides of this divide that I would be devastated if they were hurt or killed. It seems like so much of the rhetoric coming out of politics (on all sides) is based in fear, is it any wonder that people are angry and afraid?

So many tragic situations could be avoided. Not just by talking, but by LISTENING. By honestly hearing the other guy's perspective and applying some empathy. If people would say to themselves "How would I feel in this person's place" and be honest about those feelings, then move forward accordingly, this would be a much kinder, less toxic society.