On Writing, Part 2: Writing With ADHD 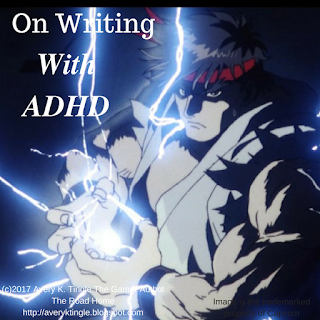 I was twelve years old, standing beneath a gray sky in Berkeley, California. Beside me, my mother wants to take my hand but is trying to respect that I'm too old for it. She stands there, in front of the student med clinic at her alma matter of UC Berkeley. She is taking several deep breaths, on the verge of happy tears. After so many years of disruptive behavior, and questions with no answers, I have been diagnosed with Attention Deficit Hyper Disorder. At last, things made sense.


After a few moments of contemplation, my mother looks at me and says; "We don't have to do it, you know."
"Do what?"
"Medicate you."
Mom saw what certain medications did to other kids. She likened it getting lobotomized.
It was a no-win situation. The medication the doctors were advising, Ritalin, would mute me. Without it, I'd be a hyperactive nightmare for my parents. But I'd keep my imagination. I turned down the medication.
Giving me the choice was one of the best things my mother ever did for me.

Attention Deficit Disorder is a learning disability that makes paying attention to one thing very difficult, almost impossible unless it's highly stimulating (like a video game). It's a TV in your mind that is always changing channels, and you are not in control of the remote. The hyperactive variation means the channel changes once every second. People who deal with it suffer from low self-esteem and struggle to form positive relationships (check and check).

TWEET THIS: WHAT IS ADHD AND HOW CAN IT MAKE YOU A BETTER WRITER


It can also be a tremendous boon to creativity because your imagination never stops going.
But sitting down to write, focus that creativity into a single objective can feel like a slow death.

I've been living with ADHD for almost thirty years. I've written and published, a number of shorts over the years, learning to tame the disorder to a point where I can work. Here's how you can succeed as a writer ADHD.

• Make Time For Your Writing

The mind craves routine. When you first attempt this, it may be like trying to hold lightning in your hands, but as you get used to it, your mind will acclimate, and then anticipate that the time you set aside is solely for the writing process.

Oh, internet, you wonderful, beautiful time sink with your adorable, hilarious gifs and memes and tweets and Facebooking. You have enough open browsers in your mind (it took me three tries just to write this sentence), so minimize the distractions and keep your browsers closed.

• Block Out The World

Seriously. No phone, no notifications, no nothing. Music may help the process along. Don't let anything get between you and what must be done. Which brings me to my final point.

One of my favorite animes, Street Fighter 2 V, had Ryu in a temple trying to learn Hadoken. He could see his ki firing over the place like random bullets. He realized these were his intentions, and that he had ''too many thoughts, too many questions". He realized that he could focus these intentions into a single attack and fired off Hadoken. It's the best analogy I can think of for sitting down and getting the job done. You have no distractions, nothing to get in the way at this point except what's in your own mind. What are you here to write? Bring your mind to that. Again you may find yourself wrestling the lightning, but it does get easier over the time. Bring your focus to the project at hand, and focus only on that. Then, put your fingers to the keyboard and trust the process. Living with ADHD doesn't get any easier over time, but it can be a boon if you allow it. I've been writing as long as I've been contending with this disorder, and thanks to these tips, a lot of trial and error and my wonderful mother, I'm better for it.

TWEET THIS: FOUR WAYS ADHD CAN MAKE YOU A BETTER WRITER

You can now add the Road Home to your favorite RSS aggregator! Click here to add this blog to your feeds!