On Writing, Part 1: Respecting the Craft

January 05, 2017
Welcome to my new series on the writing process "On Writing" because I couldn't think of a better title for the time being. I've been an indie author for eight years and in that time, I've been a ghostwriter, writing consultant, both traditionally and self-published author, and above all else, a tremendous screw-up.
Right now, I'm working on the final draft of my first real novel "Agoura Hills". Inspired by actual events, this is the story of two kids who get to the bottom of a centuries-old mystery when tragedy strikes close to home. As I wind down the process I'll share my many, many screwups and hopefully triumphs. Hopefully you gain something from them and if not, well, maybe I can make you laugh.
Enjoy. 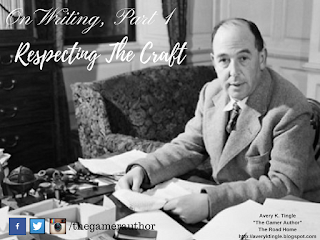 I've had pictures in my head--whether I wanted them or not--for as long as I could remember. Writing wasn't really a means of expression as it was a way to quell the voices in my head. Sometimes, they'd scream. Then, I got older and found out I could use writing to inject myself into my favorite stories and suddenly it became escapism.

No one will ever, ever read those. I'm hoping my mother burned them.

Like a lot of other creatures, I was cursed with an overflow of voices of "logic" and "reason" telling me that we didn't need anymore starving artists, that I needed to find something that had a "sure future". I'm sure some of those people, like dad, meant well.

I tried to the normal life and it drove me crazy. I write not because I necessarily want too, though I do. I write because it quells the noise in my head.

So imagine my surprise when people start telling me my writing is good. One person even compared me to Shakespeare.
But last year, I reached the zenith.

A friend of mine posted to Facebook, commenting that I was doing well for myself. Sure enough, Amazon had included my new release, a short story (!) in their newsletter because first week sales were through the roof. When I published a novel to Kobo later that year, it stayed in their top fifty for weeks.

You know the problem with being really high up there? The fall hurts.
After so many years of hearing what a waste my writing was and how I'd never make it, I felt like I could do no wrong. I could publish anything and it would be a hit (Shut up. I know.). So I quit caring so much. I relaxed (too much). I went through the same routine and published a lot of complete and total shit over the last year. I figured it was better to stay in the public eye than publish good stuff.


You know what? I eventually pulled almost everything I wrote, too. Especially the novel. Poor workmanship. I could have--should have--done so much better.

I've learned, especially over the last year, that if you want your writing to be successful, you really have to treat it like a job and hold yourself accountable. You have to respect the craft. Or it will kick your ass.

So thus far, this is what I've done to ensure I do better work.

1). Write (Almost) Every Day.
Writing isn't a painless process. I feel like I've run miles when it's over. Sometimes I'm left with a headache. Bleeding onto the page? That's me. The process is both a relief and a trial by fire. I don't do it, I go insane. I do it, I'm wiped out.
So I write Monday through Friday for a few hours--and then I stop. Sometimes I could keep going, but I stop anyway. Right now it's just about establishing the habit, getting my mind used to the process. Then I'll try to be Superman.

2). More Productive, Less Busy.
I don't want to spend entire days killing my brain in hopes of getting that one scene right. I have time (God willing). I'd rather spend a few hours working, refining, getting things ready to publish, and then the rest of the day seeing to my other obligations. Eight hours of poor work isn't as good as four hours of good work.

3). Get Out Of Your Own Head.
I spend most of my time on social media in groups, rather than posting my own random stuff all the time. I make sure to stay on top of my email (turns out there was son good stuff in there). In the last four days alone I've become aware of more opportunities than I learned of all last year. You can't create in a vacuum, but you what you allow in.

The funny thing is, no matter how good Agoura Hills turns out to be, I still expect to lose money. It's my first real outing, I'm not going to pull it (I won't have too, it's a good story). There are no overnight successes, and you don't start to see real results until you have a backlist--and you have to be damn good at what you do.

So this is my journey. Thanks a lot for reading, tagging along, and there's anything you want me to tackle, let me know in the comments.