The Road To Agoura Hills

December 01, 2016
About a year ago, a friend of mine told me about the hundreds of people across the country who go missing each year in our national parks. In a moment of sheer hubris, I told him I could figure it out.

Sure; a mystery that's been going on for decades, but I'm gonna be the one to put it together. Humility wasn't one of my strengths.

Of course, I was only able to put together the slightest bits of info, but I have far more qualified friends. So I asked them to look into it.

That's when things got weird.

All I kept hearing about was the unbreakable wall that no one had been able to get through when it came to looking at these disappearances. For whatever reason, law enforcement did not want to discuss the issue. At all.

Which begged the question; just what the hell is happening to people out there?

The reports strain the limits of plausibility. People aren't just disappearing; some of them reappear, miles away from where they were taken in a relatively short time. No one seems to have an explanation for this. The missing can't recall what happened.

People don't just disappear. Something happens to them, and no one wants to talk about it.

So I approached Agoura Hills with the idea of telling a thriller; people are going missing, but if you read the prequel Agoura Territory, you'll at least have an idea why. The question these characters face is, can they stop it from happening again?

This is the most difficult story I've ever undertaken because these characters are not like me. The central character, fourteen at the time, is logical, timid, and very forward thinking. No one will ever call me those things. So writing a personality that doesn't so much sync with mine and making it plausible has been a challenge.

Agoura Hills could be small town USA. Everyone knows each other, grew up together, looks out for one another--and keeps each other's secrets. There isn't a soul who lives in Agoura Hills who does not have some idea as to what's going on, and watching them wrestle with the morality of their choices has been both gut wrenching and fun.

Both the first drafts of Agoura Hills and Agoura Territory are done, and the second drafts are underway. I'm trying to have them out on all e-readers and in print early next year. 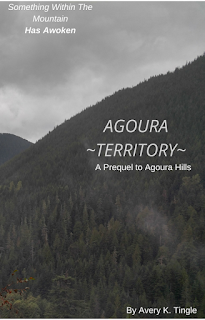 Avery K. Tingle "The Gamer Author" is the author of sci-fi/romance the Anniversary. Titles are available on Nook and Kobo too. If you’re new to Kobo, you can get both stories for free!
Sign up for the Hidden Level newsletter and get weekly updates, writing advice, and a free short story.