December 27, 2016
I barely remember seeing Empire Strikes Back. I was a child, and what stuck out the most was the battle between Luke Skywalker and Darth Vader in the bowels of Bespin.

I remember Return of the Jedi a lot more. I was too young to appreciate the sex appeal of Carrie Fisher's slave outfit. What I remember most vividly was when she grasped her chain, leaped behind Jabba the Hut and proceeded to strangle the life out of him. To this day, it's one of the most powerful scenes I've ever seen in any film. It took everything she had, and it wore her down, but she would not let go until that fat bastard was dead.

Leia wasn't a passive leader. She was out there on Endor, in the thick of things with Han and the Rebel Alliance. This was my introduction to the female superhero.

It wasn't until she died that I realized how profoundly I'd been struck by her portrayal of Princess Leia. Today, I still have a hard time reconciling her with what one thinks when it comes to the traditional Princess. Thanks to her, I've never viewed women as weak or a "lesser gender". Quite the opposite; the "lesser gender" will choke the shit out of you if you push them far enough

I saw her in a couple of other films, but like a lot of people, Star Wars stuck. I know she wrote books, but again, Star Wars stuck. I laughed my ass off when I read that she used to have sex with Princess Leia fans. I missed a major opportunity in life. Not that I would've had a chance anyway, but let a man dream.

You know, when I read that, though, it hit me; this woman overcame so much to get to where she got to in life. And she absolutely did not give a damn what the haters thought of her. There was no insult you could piss her off with, no shade you could throw her way because she'd looked in the mirror and faced down every little bit of darkness that stared back at her. And she came through smiling on the other side.

We may not see a life lived freer for quite some time.

But her work is completed now, and I hope she knew how much we loved her at the end.

May The Force Be With Her. 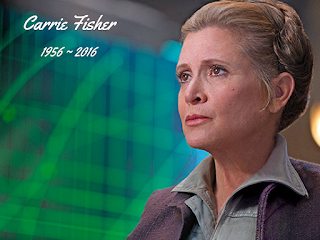