October 14, 2016
I was predominantly homeless for ten years. The first stint of that homelessness was in my hometown of San Francisco. I have fond memories of the Aranda hotel on Turk in the TL, nodding off on BART and waking up to the treescape in Orinda, foraging good food and nighttime brawls outside of the (now defunct) Carl's Jr. at seventh and market. While I never want to be homeless again, those were some of the most educational years of my life. 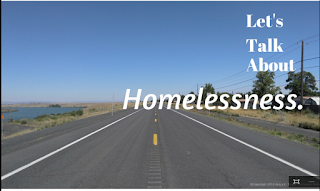 So when I read an article about people with too much money trying to, once again, evict homeless from San Francisco, it hit home. Homelessness is not what you think, and it's a far more complex issue than we want to acknowledge.

So let me lay out some truths you may not know about being homeless.

1). Not Everyone Is Homeless By Choice--But More And More Are.
Living out of doors is an incredibly liberating experience. You can pretty much go and do whatever you want. Fall asleep in one city, wake up in another. Repeat. Take a temp job (Labor Ready or some such), work it for one day, scrape up enough to eat and clean yourself, move on.

What I enjoyed most about it was that I didn't have to put on a mask, or shield part of my personality. There was a simple, albeit brutal logic to street justice, and it's not what you see in the movies. People construed as fake, or who were not known for keeping their word, had a very hard time getting by. All you had to do was be honest and be willing to work. If you had these two things, you could survive.

2). A Great Deal Of People Have No Other Choice.
I promise you, no mother is standing out in thirty degree weather with her children because she wants to be there. There are more and more people who cannot go home, out of fear for their safety, than we all would like to admit. This is especially true for male victims of domestic violence (I speak from experience here). Resources are scarce and the stigma is worse. A piece of paper doesn't stop a dedicated loser for beating someone up or worse. Shelters can be crime centers, but at least on the street, you can keep moving. Hide. Stay alive.

3). We're Not As Big On Second Chances As We Pretend We Are.
We all make mistakes. Some of us make criminal mistakes. And the truth is, in a lot of cases, once we've served our time, society isn't as willing to welcome us back as they'd like to believe.
The stigma of being a criminal is incredibly difficult to shake, especially when you're trying to go straight. I'm not speaking of violent, major offenses, either. Try attempting to get a job when you've just gotten out of jail. Seriously, go try. I'll wait.
When you're trying to re-define yourself when the world has already made up it's mind about you, that can be crushing. Why bother? (I'm very driven, and I'll be damned if I was gonna let all my naysayers be right about me).

The truth is, there are a lot of underlying factors when it comes to homelessness. Yeah, there are people who game the system, and there are those who enjoy the life, but there are a great, great many more who had the life thrust upon them and can't find a way out. We will never be able to "get rid" of homelessness. You think evicting them is going to do any good? These are the most resourceful people on the planet. They'll just move somewhere else and smile at you while they do it.

Rather than throw money at the (bad) idea of pushing these guys out of the city, we need to be putting money at expanding resources for those living out of doors, in fear, or trying to start over. The focus needs to be on turning people into productive members of our society, rather than shunning them.

I've been off the street for eleven years, thanks to the resources availed to me.