What I Did Wrong On My First Book 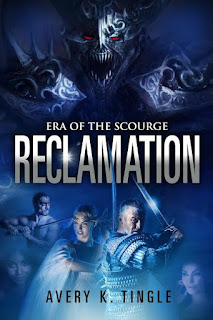 Era Of The Scourge: Reclamation is my first real book. After about a year of publishing shorts, I decided to take the plunge and write an actual novel.

The concept was simple; a guy takes his wife back from the bad guy, just like the games I played back in the day (mistake one). The arches were a little more complex; an alternate history of our world, under siege by tyrannical demigods, betrayal by people we hold most dear, redemption from things we've done, and overt proof the gods haven't forsaken us. It's very much a dark fantasy, with violence, magic, creatures, the whole nine yards. The book was, by no means, easy to write, but I did finish and publish it. Amazingly, it generates steady income despite having no reviews.

However, while I did accomplish the basics in getting this project done, there were a whole lot of things I missed the mark on. It cost me both exposure and revenue, meaning I spend a lot of days playing catch up instead of focusing on the next book. So here, in my opinion, is where I went wrong with my first book.

I'm most successful on Facebook and Twitter. I should have spent much more time on both networks building hype. This is where I let fear and indecision get the better of me. Reclamation was originally supposed to be a flash series, and when I transitioned it into a novel, I eased back on blogging. The info I was putting out there was drawing interest, and I didn't follow up or stay with it. As such my day one sales were abysmal and I've struggled to keep the story in front of people since. Going into my next two books, I'm far more active on social media with what I'm doing.

Finding your target audience is one of the most difficult tasks you ever undertake as an indie author, at least in the beginning. Not only could I not compare my title to others on the market, I didn't think it was necessary to do so (BIG MISTAKE!). People would ask me what my book is about, and my best answer was "Castlevania meets Final Fight with more story". Now, if you're an old-school gamer, you may get that reference. If you're a reader, you may have no idea what I'm talking about.
You can't just write a story, fling it to the interwebs, and expect it to be successful just because it exists. My inspirations may come from video games but had I done more research, I would've discovered the other authors my work is similar too, used better keywords with Amazon at the beginning and had a bigger day one impact. Once again, I'm playing catch up.

This may be my biggest mistake when it came to the actual content of the book. As an author, I specialize in action and dialog. I’m working on description and how to disperse info, but I did not provide any real comic relief throughout the story. Those who have read the book have praised it’s tension, pace, and action, but there isn’t much in the way of comic relief throughout the story. I pretty much yank you into this world and don’t let go until the end. So the next stories I do will have characters or arcs specifically designed for tension relief.


So these are my three big mistakes that I made with my first book. I’m grateful for the errors because it gave me something to learn and apply for my next stories.

Have you read Reclamation? What did you think? What mistakes have you made along your authorial journey? Leave a comment and I’ll repay the favor.

Jon Strother said…
"had I done more research, I would've discovered the other authors my work is similar too, used better keywords with Amazon..."

So, if you had to do it over again, what authors would you have chosen to compare it to and what keywords do you think would have helped the most?
~jon
July 4, 2016 at 1:18 PM

Avery K. Tingle said…
I should've referenced JRR Tolkien for his fantastical world under brutal oppression and CS Lewis for his allusions to the afterlife. I would have used Lord of the Rings and the Lion the Witch and the Wardrobe as keywords because I'm sold in that category anyway. I would have stayed away from keywords that associate with Christianity because that resulted in my book coming up in irrelevant search results, which severely hurt my ranking.