What Dragon Age Inquisition Taught Me About Story Execution 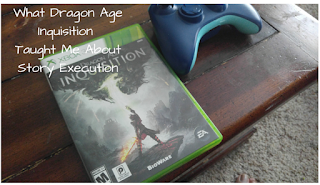 Dragon Age Inquisition isn't supposed to be my kind of game. Save for Star Wars: Knights of the Old Republic (Also from Bioware), I avoid games that follow the dice mechanic of the pen and paper RPG. All I need to know is whether or not I hit the guy. Rolling this to the nth power to deciding the critical chance of success or failure is way too much math for me.

But after so much hype and  this trailer, I had to see for myself. I'm so glad I did. It feels like so few games care about story anymore. Not since Mass Effect have I encountered such layered, complex, morally ambiguous characters in such a compelling world. I don't remember the last time I agonized over every decision I made in a game. The world was so enthralling that, convinced I hadn't played correctly, I began a second playthrough that currently clocks at seventy hours.

On the first playthrough, the game froze so badly that I exchanged it.  A new copy did not resolve the issue. The game is downright unplayable. The glitches and crashes continued mounting to the point where I began to see the end coming. It was both infuriating and painful, watching a game that never should've been on the 360 try to force its way through archaic hardware. When that final crash came, seventy hours down the drain, I was really pissed off. I still am.

It got me thinking.

As indie authors we struggle to keep our voice above the din, to stay relevant. My preferred method is high-volume, where you consistently put out work to maintain fresh material and a high ranking in search engines.

The problem with this method is, when it's abused, a lot of people end up putting out complete and total crap. The market gets saturated with this crap, people get sick of this crap, and it makes it harder for the rest of us to get people to read our work.

So the question is, while you could churn out a number of short works to keep yourself fresh...

...if they're not professionally edited,
...if the cover looks like a toddler's first coloring attempt,
...if the story is poorly conceived and badly executed,

Dragon Age Inquisition is an incredible game that should never have been on the 360. It's a flawed execution of an excellent concept that comes off as an attempt to cash in. Because of this, Bioware's brand is a bit damaged.

So just because you can do something, should you? Will it bring you more fans, more sales, more revenue? Is it a quality product that you would stand behind, that can withstand the most intense scrutiny?

Because if it doesn't, rethink your actions.