We Have A New Enemy.

June 13, 2016
On June 12, 2016, a radical extremist walked into the Pulse nightclub in Orlando, Florida. He proceeded to kill between forty-nine and fifty people and wound fifty-three more before dying in a shootout with police.

Those are facts. That is what happened. 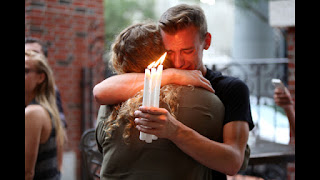 Let's start with the basics. The man who engineered one of the worst shootings in our nation's history was, in fact, a radical extremist. He was not indicative of everyone who shares the Muslim faith, anymore than Timothy McVeigh was a shining example of Christianity. We need to recognize that there are extremists in every faith, and while they most certainly should be dealt with before they can do damage, we need to recognize that the ideologies of a few radicals do not represent the entire sect.

That's step one. Bear with me, because we have hard times ahead.

We have a new enemy, people. Traditionally, we could use the fear of torture (whether or not you agree with it, we do it) and death to attempt to stem this sort of thing, but not in this case. What makes this enemy so dangerous is not just their single-minded devotion to our destruction but the fact that death is not only the expected outcome, it is the goal. We can make jokes and post memes, sure, but the fact is we are dealing with an enemy who believes their violent actions will earn them reward when they shed this mortal coil. How do you go about fighting that?

That's step two. Acknowledge your enemy. Enemies who are understood are easier to defeat.

If you're waiting for me to start touting stricter gun laws or speaking against one candidate or another, you're wrong. In fact, that rhetoric is not only divisive but it plays right into our opponent's hands. We fight with each other while they destroy us. Because make no mistake; they are destroying us.

To paraphrase V, there is something terribly wrong in this country, and our enemies are taking advantage. If we truly wish to preserve our way of life and triumph over this new enemy, we will each of us have to make compromises none of us want to make. We will--we must--set aside our petty differences. We must realize that it's no longer about who is sleeping with who, who is marrying who, who is using what bathroom. Fifty people lost their lives senselessly because someone fell through the cracks. We are beyond our petty squabbles now.

Our screening measures need to intensify--now, not later. We need to be taking a look at individuals, and individuals of all races, religions, creeds, and nationalities when their behavior becomes suspect. We really need to stop looking at someone based on their orientation and their skin color, and look at their actions, because the latter will tell you everything you need to know about that person. We all know that.

Therein lies the last step. Rather than blame, hate, and accuse one another, we each of us need to take a look in the mirror and ask ourselves what we are willing to do to protect ourselves, our families, our children and our futures from incidents such as these.

Then, as one nation, we turn to ISIS and all others who would oppose us and say "If you attack is, we will destroy you."

I hope no more people need die, not ever, before we wake up and do what needs to be done.

This Blog Post Is Dedicated To The Victims at Pulse Nightclub in Orlando, Florida. Go with God.