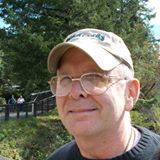 It is my great pleasure to introduce to you Mr. Larry Lee Caplin, author of the Watchmaker series. Recently retired, he spends his days doting on his wife and unabashedly warning others, often hilariously, of what happens behind the scenes in grocery stores. Clearance sales on meats aren't all they're cracked up to be.

Larry is the most atypical man of his age I've ever met. I envy his energy. If you listen to him speak, he sounds twenty years younger than he is. He's always smiling, upbeat, and fun to be around.

He's not your typical indie author. He loves what he does, but he's not blasting about it all over social media. He doesn't have multiple accounts. Most of what he talks about online revolves around the happenings in his life, rather than his writing. He gives most of his work away for free.

So I was surprised to hear that he was actively promoting his work, until I learned the reason. Hence the introduction.

"The Watchmaker" is a mystery series that follows the adventures of a retired homicide detective turned private eye who often partners with his best friend, who happens to be a watchmaker. You have to read it to get it.

Larry has pledged to give one hundred percent of his royalties to a gofundme account that is helping an ambitious young man stay in school.

So this is an indie giving away every cent he earns to a couple trying to better themselves. So add a good mystery series to your collection, and aid in the betterment of others at the same time.

Enjoy the series. Thanks for reading.


Era of the Scourge: Reclamation is a dark epic fantasy in the Universal Warrior series that harkens back to a time when our world was under the tyrannical rule of the forerunners to the Four Horsemen of the Apocalypse. In "Reclamation", join a betrayed herald and a naive Angel as the two journey to retake what was stolen. Their actions will reignite a war that will decide the fate of our world.

Action/fantasy in the same vein as the Chronicles of Narnia.

Sign up for the Feral Inception newsletter for writing and self-publishing tips, inspirational stories, discounts and free stuff! Sign up now and get a chance to win a Samsung Galaxy Tab 8!