I Am Not Angry Anymore. 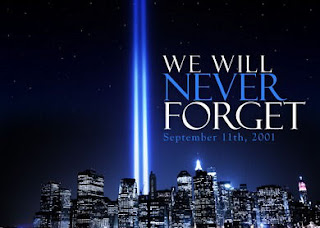 We all remember where we were, on that day, fourteen years ago.

I was in California at the time. New York might as well have been on Mars. I was violently roused from sleep, someone screaming at me the events unfolding on TV.  I thought it was a movie, or a trailer, or an exaggeration or something.

I watched as the plane flew into the trade center and disappeared, like the tower had swallowed it or something. Then, a moment later, was the explosion that eviscerated the building.

What stuck with me most was the images of people leaping from the edifice that tilted and burned. The people who chose to plummet to their death rather than burn. I tried to imagine what their last thoughts must have been, knowing that there was no way out. Having to choose the least painful method of their own death. A death that should not have occurred that day.

And I was angry.

I was angry and I acted on it. I hated anyone who wasn't Christian. I believed all Muslims were scum and terrorists, that Allah was a synoym of Satan. I believed it was us against them.

I've since come to learn that no God fosters hatred.

God eventually brought me into the path of other Muslims, and for a while, I hated them too. I especially hated hearing how offended they were at what had happened. I thought it was false anger, crocodile tears at the extremists who'd committed this atrocity.

I did not pay attention that these Muslims were giving me a place to go when I had none, they were feeding me, standing up for me, and teaching me to fight. All the while tolerating my bigotry, my anger, my hatred...patiently educating me and waiting for me to come around. I never truly did, but I walked away from them with a better understanding of their faith, and a my first best friend who did not share my faith.

Time passed. I eventually found myself in New York. I browbeat my contact into taking me to Ground Zero by night. When we arrived, we weren't the only ones there. I saw about twenty other people, sporadically placed to keep from drawing attention to ourselves. Some were looking for souvenirs, and I found that repulsive. I didn't want to carry a piece of the fucking WORLD TRADE CENTER in MY POCKET.

I had weight-training gloves on when I sank my hands into the ground. I remember thinking it was warm snow, and thinking that it was odd to have snow that time of year.

My friend told me that it wasn't snow.

I was running my fingers through the dead.
That is still with me.


God continued to guide my education of the world. I spent time in churches and mosques. I learned there was nothing wrong with what I, or they, believed.

It's been fourteen years since the day our illusion of invincibility was shattered. I will never forget September 11, 2001 as long as I live. None of us will. But I am no longer angry about it.

To remain angry at the perpetrators serves no purpose. They don't care that we're angry, in fact, they may count that as a success because their aim is internal discordance and disarray. A divided enemy is easier to conquer. Our enemy doesn't care if we're angry.

But more importantly, to remain angry dishonors the memory of those who perished that day. All of us lost someone we knew or loved that day. These people, though no longer with us on the planet, look down on us, and watch over us. They see our hearts, our actions. They lament the pain that their loss inflicted on us. They may even lament our very human need for revenge. But to remain in a state of anger over an event that we can do nothing to change dishonors those who died that day.

No, I'm humbled, but I'm not angry. I live my life as fully as possible. I write my books. I love my family. I worship my God. I work my job. I love my friends. I try to make the world a better place. Because in doing so, that is how I move against those who would destroy us. Hatred feels good, but dulls a weapon, aim, and intentions. Love, the ability to forgive, keep smiling, and keep moving forward, that is the hard, and ever rewarding thing we must adhere too.

Thank you for reading. Tell those you love that you do, and hold them tightly, because tomorrow is promised to no one.

This blog is dedicated to the memory of those who died on September 11,2001.