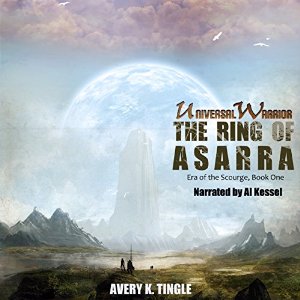 If I had to categorize Universal Warrior, I would call it Battle Fantasy;

-The story revolves around physical battle. Virtually every character has a reason to battle one another, if they so chose.

-There is growth in battle. Characters grow and develop from their battles against each other.

-There are consequences to battle. Universal Warrior takes place in this life and the next. Combatants answer for their deeds in the next life.

-Battles level the playing field. This is man from gods, man with gods, and eventually, man against gods. Fighting is the one thing
both man and the gods have in common.

-Battles resolve wars. For if it is really On Earth, As It Is In Heaven, then there is war in Heaven. This series explores that, and the consequences it has on our world.

Universal Warrior traverses multiple time periods ranging from the beginning of time to the end of the world and the creation of the new world. This covers the stories
currently available or the events I know about now.

-Alpha Period
Setting of the Era of the Scourge, Atherean Defenders, and the Last Campaign series. Before the nations split, when the Earth was known as the Third World.
Before Heaven and Hell were known by their common names. Before the division of gods. Rise of the archangels. Fall of Lucifer.

While religion heavily influences a lot of Universal Warrior, I didn't want to stick to any one god or another. Instead I wanted to explore the origins
of mythology while adding my own ideas.

Universal Warrior is currently in the Alpha Period, exploring the first time the Four Horsemen were visited upon our world. They ruled us for
more than a century before we banded together to take them on. The Era of the Scourge tells the stories of their rise, along with the ascension of those
who would challenge them. Ultimately, this is what Universal Warrior is about; setting aside differences and banding together to take on a bigger foe.

At this point, I'd like to invite any and all interested parties to sign up for the weekly newsletter. It doesn't cost a thing, and I will never share or divulge your email address without your permission. Plus, it gets you a lot of sneak previews, discounts, and free stuff.

All newsletter subscribers who subscribe before July 3, 2015, will receive the free flash fiction series Universal Warrior: Reclamation, which deals with the events leading up to Era of the Scourge Book 2: Warblooded.

All newsletter subscribers also see all blog posts before they go live.

You can sign up here and expect your first issue within the next week.

Thanks a lot for reading and your support!