From First Idea To Final Draft Part 1: The Truth About Writing 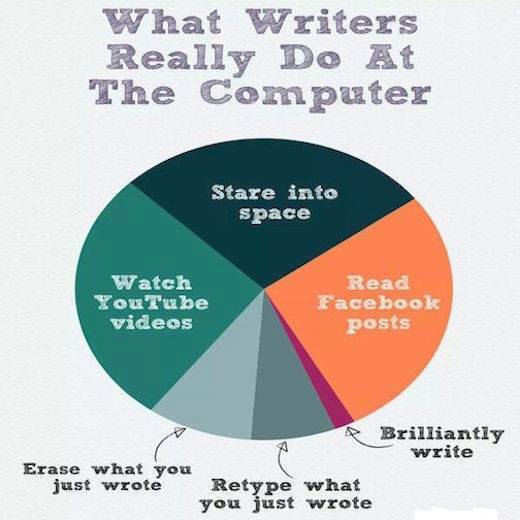 I'm going to tell you a hard, cold, bitter truth about writing and the creative process in general. It's not going to be something you want to hear. It may turn you off of the craft altogether. But it is the truth.

This meme is darkly funny because it's true. We do spend an inordinate amount of time watching videos, screwing around on social media, or generally staring off into space wishing for some magic force to write the words for us.

Because the truth is, there are moments when we feel trapped; where we would rather do almost anything but write, but knowing that we cannot leave our space until we do. Knowing that once we've written, we will be granted momentary relief.

Because the truth is, writing hurts.

It's much like emotional childbirth; you are literally willing something into reality. You are birthing something that only exists within your imagination and with each stroke of the pen, or strike of the keys, you are dragging, pushing, or pulling the intangible into the real world.

The process is incredibly exhausting and takes its toll in different ways. I never sleep so soundly as I do upon completing a project.

The worse part is; the first thing you write will be complete and total crap, and it will make you wonder what the hell the effort is for.

So there it is, the brutal truth about writing. In the next post I'll show you how to capture your first idea no matter when or where it hits you, but before we got started, I thought you should know the truth.