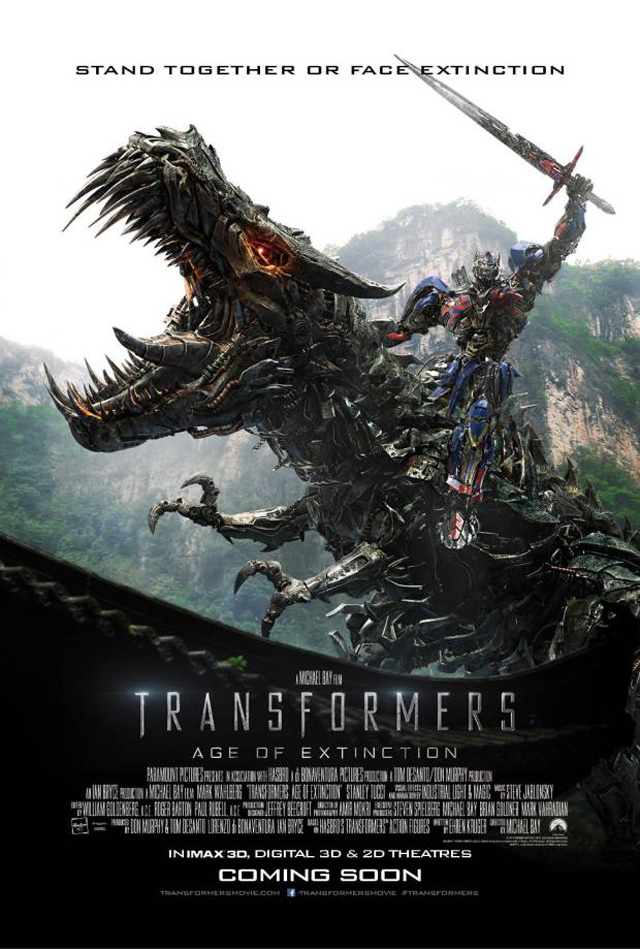 Michael Bay shows commendable maturity and uncharacteristic restraint behind the camera as he delivers the fourth film in the TransFormers franchise. A reboot disguised as a sequel, TransFormers 4: Age of Extinction is almost on par with the first film and far exceeds the last two over-caffeinated outings.

It's been four years since Megatron and the traitorous Sentinel Prime led the Decepticons in battle against the Autobots in Chicago. The battle resulted in the loss of thirteen hundred human lives and the destruction of the alliance between the Autobots and the world's armed forces. All TransFormers, Autobot and Decepticon alike, are being hunted and executed on sight. The survivors run and hide for their lives. Broke, desperate inventor Cade Yaeger (Mark Wahlberg) makes an alarming discovery, and the story takes off from there.

This is no longer about Autobot and Decepticon, it's about Autobots betrayed and run down by those they'd sworn to protect. Most visibly affected is the leader of the scattered Autobots, Optimus Prime, who is darker here than anything we may have seen him here to date. For the first time, we see the infallible leader question the very tenets that have made him such an endearing character over the years.

This is arguably the best human cast assembled for a live-action TransFormers movie. Mark Wahlberg fits, though he won't make you believe he's a nerd. He excellently demonstrates the all-consuming passion that every creator endures, so much so that he hasn't realized that his daughter Tessa (Nicola Peltz, because Rosie Huntington-Whiteley wasn't available) has all but grown up. Her boyfriend Shane (Jack Reynor, who continuously fades into the background) comes through when needed, except for a moment at the film's comedic high point. Kelsey Grammar is absolutely harrowing as the antagonistic and completely ruthless Harold Attinger, whose motivations for wanting to see the TransFormers eradicated is only revealed at the end of the film. Stanley Tucci is, as always, flawlessly ridiculous.

Michael Bay actually paces the film to allow for character development instead of hopping from one blistering action sequence to the next. He manages to wait until just before the film's climax to unleash worldwide carnage. That isn't to say the other action sequences aren't up to snuff; it's a Michael Bay film, and he delivers.

TransFormers 4 holds the promise of a return to form for the franchise. I'm hoping it's a step in the right direction, instead of a hapless tumble down the corrupted rabbit hole, like the last two films were. This is worth seeing and especially worth the price of admission for 3-D.