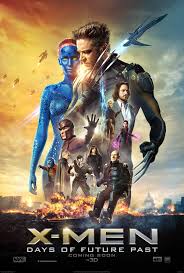 Entertaining In A World That Hates And Fears Them

Fourteen years after the X-Men made their debut on the big screen, after so many hit and misses over the years, we are given arguably the greatest X-Men film of this generation. The cast of the original trilogy is united with the cast of First Class to bring us an apocalyptic time-traveler in which mutants have been hunted to the brink of extinction, and the only way to avert the conflict is to "end the war before it begins". Unfortunately, this calls for Professor Charles Xavier and Erik "Magneto" Lensherr to set aside their differences, when these differences have just now been brought to light and the emotional repercussions from the events of First Class are still being dealt with.

In your typical, ruined-Earth future, Sentinels all but rule the planet in Terminator-like fashion. As Sentinels can quickly adapt (and emulate) any mutant ability, Charles Xavier and Erik Lensherr (Patrick Stewart and Sir Ian McKellen, respectively) lead a small band that can only evade the Sentinels in such a clever way that I won't spoil it for you. However, realizing the war is lost and their species is doomed, a final, desperate plot is hatched; send one of their own back in time to prevent the war. Wolverine (Hugh Jackman) is the only one who can make the journey, as he is the only one who can survive the trip.

The vast majority of the film is set ten years after the climax of First Class, where Wolverine struggles to bring the two most powerful mutants on Earth, now on very, very different paths. Together they must stop a vengeful Mystique (Jennifer Lawrence) from unwittingly acting as the catalyst that eventually dooms all mutantkind.

This is indeed the penultimate X-Men film with very few flaws. Bryan Singer leads a cast that finally appears comfortable and at home with their characters, especially Hugh Jackman as Wolverine. The dynamic between James McAvoy and Michael Fassbender is still wonderful to behold, now laced with the beginnings of animosity that will define their relationship for decades. This may be one of the only films in which Hugh Jackman's Wolverine displays not only the trademark ferocity of his character but the deep mental scarring as well. Even Halle Berry no longer looks like a pretty face in costume, and no longer appears embarrassed to cut loose with Storm's powers on camera. Other familiar faces, such as Shawn Ashmore's Iceman and Daniel Cudmore's Colossus are well-represented. Jennifer Lawrence put in the work to pull off a physically-intimidating Mystique and delivers another successful performance. James McAvoy is at his best as a troubled, lost young Charles Xavier and Evan Peters had way too much fun with Quicksilver.

The only low point of the film is Peter Dinklage (Tyrion Lannister in HBO's Game of Thrones) and his representation of Bollivar Trask, the creator of the Sentinels. His character feels wooden and uninspired, though I attribute this to a two-dimensional script for his character.

Bryan Singer is at his best when directing the X-Men movies. The camera and the action never let up, while we are unable to look away during the interactions and character developments that allow us to catch our breath.

After such flops as X-3 and X:Men Origins: Wolverine, Days of Future Past gives us the X-Men film we've been waiting for. Harrowing, breathtaking, hilarious and epic in every sense of the word, the film is worth seeing twice.