Cross The Streams (A Tribute To Harold Ramis)

February 24, 2014
"Funny us goin' out like this," Ray commented sadly, "Killed by a hundred-foot marshmallow man..."
"We've been goin' about this all wrong." Peter chimed in, always the one to ease the tension, "This Mr Stay-Puft; he's okay. He's a sailor, he's in New York. We get this guy laid, we wont have any trouble."
The entire building shook with the impact of the monster sprung from the depths of Ray Stantz's imagination. The marshmallow man was ascending the building.
Coming for them.
"I have a radical idea." The words erupted from Egon the moment the idea flew into his mind, "The door swings both ways. We could reverse the particle flow through the gate."
"How?" Ray asked.
Egon hesitated and replied; "We'll cross the streams."
"EXCUSE ME, Egon; you said crossing the streams was bad." The humor was in Peter' voice, accompanied by an uncharacteristic, serious undertone at the thought of Egon's plan.
"Cross the streams..." Ray groaned, as though he were reading the words on a tombstone.
"Your're gonna endanger us," Peter continued, less humorously this time, "You're gonna endanger our client; the nice lady who paid us in advance--before she became a dog."
"Not necessarily." Egon replied with false hope, "There's definitely a...very slim chance we'll survive."
Winston sighed in utter disbelief.
Ray smirked. Some chance was better than no chance--
--and then Peter slapped him. "I love this plan!" He exclaimed, his voice cracking. "I'm excited to be a part of it! Let's do it!"
As the four escaped from the stairwell, Winston lamented aloud; "This job is definitely not worth another five a year!"
Ray screamed, narrowly avoiding the crushing hand of the Marshmallow man, and the Ghostbusters went to their fate.

Where-ever he is, I hope Mr. Ramis will forgive the dramatic interpretation of his work. This is one of my favorite scenes from a movie that helped define my childhood. Thank you very much for the laughs and lessons, good sir. Rest well, and don't fall for the old man-eating toaster. 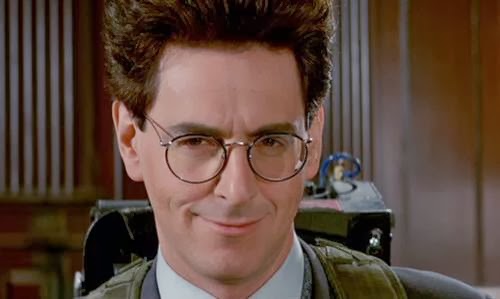