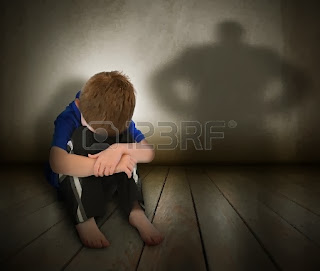 So I happened across this little tidbit while browsing my news feeds, and it brought back this horrible torrent of memories and a sad realization; nothing has changed over the years.

The message being sent here is clear; being bullied is not just part of growing up, but in this case, there's something wrong with you and they're right to point it out. Toughen up, learn to deal with it. Be like everyone else and they won't bother you.

I was so young when I was brought into the bullying abyss that I thought it was a way of life. After all, I was the one screwing up, right? I mean, I was the one who was always in the principal's office. I was the one always getting suspended.

And of course, when I started fighting back with no sense of restraint, I was the monster. I was the demon. I was the one who needed help. Never mind the multiple kids who'd been tormenting for so long their taunts, jeers, and physical assaults had seeped into my subconscious. No, what they were doing was normal; kids being kids. I was the one with the issue.

Therein lies the worst aspect of bullying. Kids are taught to speak up, to tell an adult when something is happening to them. Kids are not shown the fine print that reads the adult may not believe you or worse, that the child, or the victim is in the wrong.

The article presented here is the exact opposite way to end bullying in the world. If you really want to solve the problem, tell the children perpetuating this torment that they are wrong, and there are consequences for their actions. Tell the girl that she is beautiful, that it is okay for her to be herself, and that she is doing nothing wrong. Because she's not.

You want to end the violence and madness? Do you want to do so seriously, and not just with rhetoric and empty words? Stop blaming the victim. Stop justifying the perpetrator. Make people take responsibility for their actions.

And you will see positive change overnight.