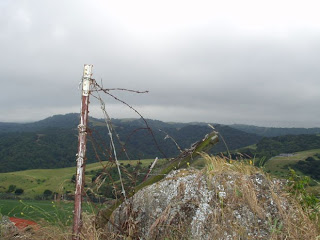 The skies are grey overhead, the wind a little too cold for this time of year, but the two who sit on the grassy knoll this is the passing of the unnatural. The threat has passed. This is the lingering aftermath.
Still, they can't help but shudder. Not at the biting cold of the wind, which ignores layers of clothing to seize their very bones, but the new memories of the terrible events they both endured, that which they've silently agreed to never speak of again.

She sits between his legs, her back to his stomach. He cradles her, and at this moment he cannot hold her tightly enough, as he knows this moment will eventually come to an end. He closes his eyes, burying his face in her hair and relishing the scent of freshly cut flowers, an aftereffect of her shampoo. Cherishing the moment just as he is, she presses into him, smiles ever so slightly, and closes her eyes.

When she leans forward and exhales, he knows the moment is over, and it is time to face the reality of their actions.
"Did that..." She asks, her voice just above a whisper, "Did that all really just happen?"
"Yes." He replies softly, "Yes, I'm afraid it did."
"Will everything be okay now..." She asks, closing her eyes and leaning into him again. He takes hold of her arms and pulls her close, wishing time would cease its relentless pace for just one moment. "This planet will be..." He replies, looking above to the grey sky, "These people will be...for now, anyway."
"So..." She inquires, turning her beautiful brown eyes up to him, "...where will you go now?"
He smiles. He can't help but smile when he she does, and he used to consider it a weakness. "I don't know." He confesses. "I'm now bound to this planet, so I think I'll explore it."
"The planet is huge." She grins, leaning upon his shoulder so she can look up into his eyes, "Where will you start?"
"North." He answers without hesitation, "What you call Canada. Then I'll head across the seas to this United Kingdom of yours. From there..." He shrugs, shaking his head, "From there, I don't know."
Her smile fades, sadness descends upon her face. He reaches up to caress her cheek, ad she smiles at the gentleness of his touch. "Will you come back?"
He nods, forcing a smile despite being on the verge of emotional collapse. "No." He whispers.
She pauses, stung. "Well...will you at least write to me?" She continues.
He shakes his head. "No, no, I won't."
She frowns, and then smiles, believing he is teasing. "Why not?"
"You misread me." He says, and suddenly the terror of their previous ordeal is nothing compared to the horror seizing his gut. "I would only come back for you, and I won't need to write to you if you're right there with me."
Her first registration is disbelief. "...what?"
"You heard me." He exhales, summoning the last of his courage. "Come with me."