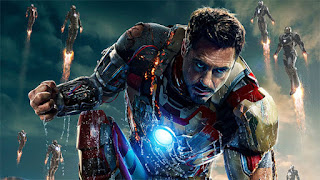 Iron Man 3 hit theaters today. Most of you will have already seen it by the time you read this. For those of you who haven't, fear not; this review won't spoil anything.

Shane Black takes the directorial reins from Jon Favreau, and as such the reportedly final film in the Iron Man franchise has a distinctly different feel to it. Everything is much more personal, the threats more imminent, the heroes more vulnerable. As well it should be, as this is the final outing for these characters till Avengers 2 hits in 2015.

Tony Stark (Robert Downey Jr.) is not doing too well these days. Neither would you, especially if you'd just finished hurling a nuclear device into deep space and then narrowly escaping through a wormhole after Captain America just called out your man card.

The confidence of the genius/billionaire/playboy/philanthropist has been left understandably shaken after having survived and experienced so much. Sleep eludes him, but he's created a great many versions of his armor and continues to find humorous ways to suit up. In the midst of this, enter the Mandarin (Ben Kingsley) who prides himself  a teacher. Unfortunately, all his lessons are delivered in an incendiary fashion.

Tony's hubris eventually gets the better of him and he calls out the Mandarin on live TV. This is where the movie really starts.

Shane Black uses a lot of extreme slow motion and close ups to create horrifying, breathtaking imagery. He expertly stretches out a few seconds into a couple of pulse-pounding minutes. The action sequences, and there are a lot of them, are breathlessly fun to watch.

The cast is magnificent. Joining Robert Downey Jr. (The fifty million dollar man) is once again Don Cheadle as James "Rhodey" Rhodes, and I'll warn you purists right now; you won't like the play on Iron Patriot. I didn't mind it so much. Ben Kingsley, as always, is at the top of his game, Gwyneth Paltrow is clearly staying in shape, but I enjoyed the addition of Guy Pearce the most. Robert Downey Jr. earns his money as we are treated to a humbled version of Tony Stark who is thrust into forced self-examination after losing everything that he believed made him who he was.

I didn't really care for the new theme, but this is a minor gripe. I've never heard an audience as silent as they were for the climax of this movie and the ending left me a bit conflicted.

This is a thrilling ride, though, and a worthy ending to the series. Hats off to Shane Black and the rest of the crew for a phenomenal piece of work. GO SEE THIS MOVIE.

Dan O. said…
While there are some thrilling scenes in this film it’s rather buried under something that feels more Hollywood generic at times. Didn’t hate it for that reason, just a bit bummed. Good review Avery.
May 4, 2013 at 9:00 AM