Writers: How Do You Measure Success? 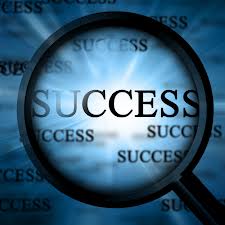 I happened across this provocative little piece on Reddit and it got me thinking. How do you define success as a writer? What does it mean to you to "make it"?

To be fair, while I found this post cynical and even a bit incindiery, I can't deny its core message; a great deal of us will never achieve mainstream success. Not for lack of talent, mind you, at least not in my opinion.  As Jeff Bridges said in Tron Legacy; "Life has a way of moving you past wants and hopes."

Sometimes we allow life to take away our dreams. We put priority on family, children, responsibilities, and before you know it, those dreams of book signings and Neil Gaiman-like fan bases have fallen by the wayside.

I've never measured my success as writer by financial gain. In fact, I think if you're writing solely to make money, you're in for a world of disappointment.
I've been in a situation where the only way I would keep a roof over my head and eat was by writing. It's the most difficult undertaking on the planet. You learn to function without sleep. It's not a pace I'd recommend, nor one I'm eager to return too.

However, making money is not how I define success. Money finds its way to the ambitious.

Having a complete stranger shout out across social networking that they love my stories, even naming creatures I made up, that's the most awesome feeling in the world.

Having the same people, people I didn't know before I started writing, comment on my blog and tell me how much they enjoy my work. Or seeing another subscriber pop up. Or seeing my work shared across the internet.

That also means, countering the article I referenced at the start of this post, that I'm not alone.

So writers, I say to you, it's true. The odds are against you. The chances are high that you will never achieve the type of success that Rowling, King, Gaiman, and even the much-reviled Meyer has.

That is not to say that you can't do it. Quite the contrary, if you're talented, and willing to endure every heartache, failure, and rejection that rains down upon you, then you have what it takes. You can do it.

And I guarantee you, as one who's made the mistakes and kept going, if you persist, if you never, ever give up, and commit yourself to your craft and the betterment of what you do and who you are, I promise you; you will not die alone.

You may, or may not, achieve mainstream success. Bear in mind that all of these people, Neil Gaiman, Stephen King, JK Rowling, and Stephanie Meyer (hey, love it or hate it, Twilight is a massive success) were all beginners just like us.  If they can, you can.

But if you stick with it, you'll see results, I promise.

Thanks for reading, and good luck.

Lissa Bryan said…
I feel successful at this point. I imagine others might laugh at it, because it's small potatoes, indeed, but it's all I wanted.

I've only just started in my writing career (my first book was published in October)and I'm fortunate enough to have already reached a point where I'm content. Anything after this is just icing on the cake.
March 15, 2013 at 7:21 PM

Anonymous said…
Couldn't agree more. I read the Reddit article and I have to say, I found it narrow-sighted at best. I've found it to be a mixture of relentless hard work, involving yourself with the industry and the education system, build contacts through personally meeting people face to face, its a huge melting pot that requires a mixture of skills, let alone writing talent. Of course, certain opportunities tend to propel people into fame, but like you say, writing for financial gain is a counterproductive writing attitude in the first place. Thank you for your honest and considered article, in the face of quite a bitter attempt at professional realism re: the industry and its lack of opportunity.
March 16, 2013 at 9:25 AM

Unknown said…
Thank you for reading and linking to my blog post. While I consider myself a stoic, not a cynic, I am very much flattered by the description of incendiary.

The most typical response to that post is that I'm cynical, jaded, etc., which misses the main overall point about what defines success, which you thankfully understand.
March 16, 2013 at 10:20 AM

Avery K. Tingle said…
You're welcome. I wanted to reply in a manner that wasn't offensive or condemning. I understood the point you were trying to make, I wanted to present a lighter side to the argument. I do agree with the fact that hard work really is the only way anyone will succeed in this life. Thanks for reading and commenting. Nice to meet you.
March 16, 2013 at 10:23 PM