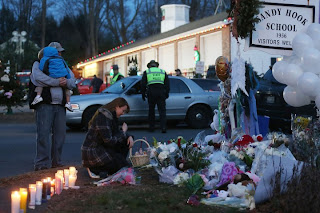 WARNING: This is going to be about keeping faith in God despite the tragedies. I'm also going to speak controversially about gun control and how, in my opinion, we should really deal with issues like this. If this isn't your thing, you should hit your back button now.

The basis of my existence is my faith in God. To me, its not a matter of believing in something I can't see; God is as intangible and necessary as oxygen. It's what's allowed me to move through life with what has been dubbed "an air of nonchalance". God has a reason for everything, and until this past Friday, I didn't need to know the reason. If something great happened, then I earned it. If something bad happened, then I'm either not ready for it, or it's not for me. Either way, I come through the other side of self-examination a better human being than the one I was.

But what happened Friday...there was no reason given. No explanation. Every shooting like this, Aurora, or any of them, is reprehensible.
But twenty dead children, not even eight years old yet. Compounded by how the media swarmed the event and posted a report about the children's autopsies. There is not enough goodwill I can send to the families of the victims, who will now have every holiday season from here on out tainted by the unimaginable.

Praying yielded no answers, although I realized that I wasn't yet ready to hear them. Shaking, crying, racking my brain and wishing there was anything I could do to prevent this from happening again. Wondering how it all went so wrong in the first place. Watching social media descend upon the event and use the bodies of these kids as a platform to eviscerate gun laws.

Truth is, if I had my way, I'd melt down every single firearm on the planet. That's right. No guns for absolutely anyone. Know why? Because the primary (not the only, just the primary) reason why we keep guns is so we can hunt and kill each other. I firmly believe that good guys should carry to protect themselves from bad guys, speaking as someone who's about to get their concealed-to-carry, but the entire cycle is sick and genocidal to me.

Sooner or later, we're all going to have to wake up. All of us, of every walk of life, we're going to have to learn that the one thing we all share is that we all have to share the planet.  Nothing is ever going to change that. Rather than look for reasons to tear each other down, we need to work at finding ways to co-exist, or we may wake up one day and find that there's no one left to hate.

Every time something like Sandy Hook occurs, we all fail as a species. A life lost violently is a mark against the human race.

Guns are just the instrument of violence, though. We don't ban cars when some inebriated fool uses his or hers to plow into a family. Regulating guns isn't going to solve the problem.

The issue is not the guns. The issue is the people who wield them, and it's time we face up to that. The first thing we need to do is stop pretending that our kids are okay when/if we know they're not. Kids are not supposed to be cussing out their parents (or anyone else). Kids are not supposed to be making death threats. If this is happening in your household, it's not a game, it's not a joke, and ignoring the issue may be laying the groundwork for another disaster.

That's only half the issue. The other half is ensuring that those who need the help receive it.
Getting decent health care should never be a matter of finance. People should not be triaged based on their bank account--or skin color.

People should be triaged by the nature of their medical condition, and that's it.
But again, it comes down to money, and those who can afford the best will get the best.  Everyone else will have to roll the dice. It shouldn't be this way, not for hardworking people who're honestly doing the best they can.

Until people stop looking for ways to help themselves, this cycle will perpetuate itself.
Hence my shaken faith, because it's the people that need to change.

To those of you who say that this is Hell, I tell you that this isn't, and though we are far from it, we are getting there fast. There is no analogy or coming back from Hell, this place of the damned we seemed to steadfastly determined to get too. Once we're there, we'll probably spend our time blaming each other for our current predicament.

We have to change. As a people, as a society, as a race. We need to stop looking down upon one another and embrace our differences, cure our illnesses, address each other's needs as though they were our own, stop placing blame and pointing fingers and start accepting responsibility for our own shortcomings so we can overcome them.

THIS, not rhetoric or even overhauling the gun control system, is how we solve the problem and move forward. Address the problem at its heart, and not the instrument. People who want to kill will find ways. What we can do is whatever is necessary to minimize the amount of people who feel that killing is the only way to make their point.

This is how we ensure that Sandy Hook never happens again.

Because I know I don't want to read about any more dead children.