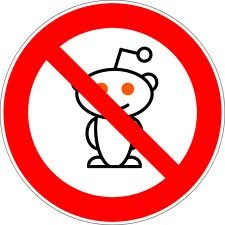 Well, a subreddit, to be fair. But it's all well and good until someone gets kicked off the net, right?

May I tell you how it happened, in hopes you won't repeat my error?

I check my blog stats several times a day. As traffic increased, I was surprised to find that the number one source for my blog traffic came from Reddit, where I had little presence and knew no one. I had even posted a character profile for Universal Warrior that was voted up ten times and viewed over a hundred times on the blog.

I found this surprising and encouraging. It's one thing if friends and family are checking you out, but if perfect strangers are coming back for more, I figured I must be doing something right. And I was, but at the same time, I was missing the details, and I was about to pay a price for it.

I use shareaholic from Google Chrome in order to share my posts. I was never on Reddit before; I simply shared my stuff, and if something caught my eye, I'd vote it up. The traffic kept coming. I kept sharing. Blogging several times a week meant that I was sharing content to Reddit far too frequently without paying it forward.

I didn't notice anything was wrong until reddit told me that I couldn't post in fantasy anymore. I thought something was wrong with my computer. When the problem persisted, I took a good, long look at Reddit. I saw then that Reddit has an inbox, and I had new mail in said inbox. You can probably guess what it said.

Inside was a letter stating I'd been banned from the subreddit. Two days prior, I'd received a letter warning me that such action would occur if I did not read, and aside by, the reddit rules and regulations.

I wrote an apology letter to the moderator, but I haven't heard back yet, and I don't expect too.

Moral of the story? READ AND LEARN THE RULES OF A SITE BEFORE YOU START SPAMMING ALL OVER THE SITE.