December 31, 2012
Instead of posting my year in review, I'd rather tell you, later this week, how I plan to move forward in 2013. I've made mistakes, tons of them, some of which I have to live with the rest of my life. Some of them made very public.

I've also succeeded as a writer. I'm both published and self-published. The journey goes on.

Instead of reflecting, I want to thank you all for the tremendous support you've shown me and this blog throughout this last year. I would like to wish you all a very happy and safe New Year, one that brings each of you the realization of your dreams, the answers to your prayers, and the end of your struggles.

As a planet, I pray we find a way to come together, to ensure what happened at Aurora, Newtown, China, and other locations never happens again. It's not about being liberal, conservative, black, white, Asian, or whatever. It's about being human. I hope this is the year we grasp that.

I also would like to tip my hat to the Mayans, who played the greatest practical joke in history. You just know they're up there rolling right now.

Happy New Year, Planet Earth. Peace, Love, and Prosperity to you all in 2013. 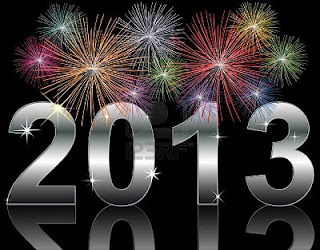