Father To Son And Back Again 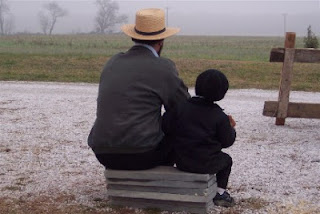 I haven't written anything personal in awhile, and I've tried to refrain from getting too personal on the Idea Lounge. In light of a life-altering (shattering, re-defining, take your pick) event, I would like to share something with you, if you'll indulge me.

There was a time my hatred of my father defined me. Every action I took was a step I was trying to take away from that man and everything he represented. Hatred is the evolution of anger, and I had been angry at my father for more than two-thirds of my life. I won't go into details; most of them are pretty well-known now. But the older I got, the more that hatred turned inward. We all eventually become the best of our parents, like it or not. I have my fathers ruthless ambition, but I also have his anger, and no matter how much I raged against the world, that anger wouldn't go away.

About six years ago, I made a decision to live a better life (getting shot at will do that to you). I would've wound up dead or in jail, had I stayed on my current course.
So over the phone, in an effort to be free of the anger, I forgave my father.
Back then, I didn't do it so much for him. I very much believe in God, His messages, and His warnings. In the end, hatred does the other person neither harm nor good, and it takes everything from you before it destroys you.

Plus, honestly, I love my father. Like it or not, we're blood. No amount of animosity would change that. I wanted to try to make some sort of peace with the man before either one of us died.
The anger subsided, but didn't go away. I quit running around, made a go of things the "normal way". Job, apartment, paying bills on time and even food shopping at Wal-Mart. As you do. I made my life a better place.

Two weeks ago, my father wrote me a long and passionate letter in which he apologized for everything he'd ever done to me as a child. It was the first time he'd done anything like that, and I have never cried that hard in my life. Thirty years of...I don't know. Pain? Anger? Self-pity? All of the above. I cried, and I called my father, and we talked.

Is the anger gone now? No, of course not, but I understand it now. I know how it works, and I know how to control it. Anger never goes away. We just get better at dealing with it. I think I understand what love is now, far more than I did five years ago. I am grateful God gave us both enough time to forgive one another and love one another as father to son while respecting each other man to man.