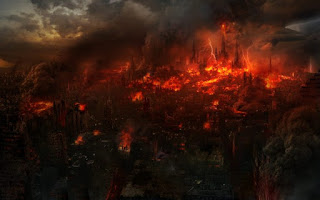 Nathaniel Ryker, simultaneously the most charismatic and polarizing political figure of all time, had re-written the law. Not just by becoming the first President of the United States to gain a third term, but also by merging the office with the Secretary General of the United Nations. He had, in a short time, become the most powerful man on the planet.

Under his leadership, Earth had been ushered into a new era of peace and happiness. The war with the Middle East had come to an end. There were cures of every known disease, from cancer to the common cold. He'd even gone so far as to broker a treaty between the Titanians and Xygnorians, warring extraterrestrial factions that had brought their conflict to Earth.

However, on October 16, 2164, an unprecedented series of natural disasters triggered the synchronous shift of seventy percent of the world's fault lines. The resulting earthquake leaves a scar across the surface of our planet. Nearly three billion people are dead or missing.

In the aftermath of this tragedy, five people--a pilot, a 911 dispatcher, a single mother, a deposed tyrant, and a tenacious reporter--will find themselves on the wrong side of the law as Nathaniel Ryker's regime targets them. On the run for their lives, they must uncover the truth about Nathaniel Ryker to ensure their survival at the end of the world.