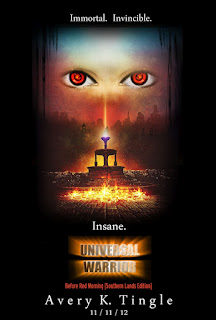 There is the legend of Adam and Eve.
The stories abound, handed down from generation to generation, of the two Alpha Humans who rallied the scattered Neanderthals across Pangea.

Adam and Eve, who waged a terrible war against Rakash and his thunder lizards, who nearly drove mankind to extinction.

Adam and Eve, who eventually proved worthy of divine intervention resulting in the deaths of Rakash and his thunder lizards.

Adam and Eve, the champions of humanity.

Her name is Lilith.
When she was created alongside Adam, she refused to be subservient to him. Unable to tolerate his domineering nature, she fled across Pangea.
When he at last found her, he cast her into what would become known as Hell for her defiance.
For the next thousand years, she remained in that place.

At first, she was alone.
Then, she conquered those who came to reside there.
After the Great Divide, she was reunited with her estranged mother, Yin, who abrogated her rule.

Now, possessing almost infinite power and a roiling hatred for Adam and all of his descendants, mad, beautiful Lillith strikes an unholy accord with her mother. She is returned to Earth near the end of Adam's life. She is given four seasons to exact her revenge.

At the end of the fourth season, or upon her killing Adam, she is to rejoin her mother, and begin a bloody campaign to retake Heaven.

Before Red Morning, three Angels and one human being faced desperate choices that would eventually lead them to becoming the Atherean Defenders, Heaven's first strike force against the forces of the Southern Lands.

Read now the story of Lillith, spurned, invulnerable, and horribly insane, as sees exacts revenge against the one who cast her out, and then allies with her mother to begin the conflict that will rage for millennia, and ultimately be decided by us.


UNIVERSAL WARRIOR: BEFORE RED MORNING
SOUTHERN LANDS EDITION
FROM AKTING OUT LLC
COMING TO LULU, FREE FOR YOUR E-READER 11-11-12
VENGEANCE COMES FOR ADAM...