About The Mass Effect 3 Endings...


First, let me say that I love the Mass Effect franchise. I’m very into story-based gaming; if the story sucks, I have a hard time getting into the game. Next to Final Fantasy VII, no game got me so immersed into its universe and characters. I play the games habitually, and I’ve read the books. The only thing I’m missing is the Normandy SR-2 on my desk.

That said, I didn’t hate the original endings of ME3; I thought they were a tremendous cop-out, and I was left feeling abandoned at the end. I played this series for five years and watching my crew—virtual friends—end up stranded on a paradise-like planet is the best they could do?! 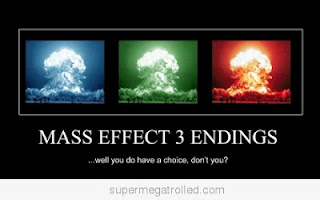 Not the way I would’ve done it, but hey, it’s not my game. I could understand Shepard’s dying. I felt that was a fitting end for him/her. A retirement on the beach with the romantic option of his/her choice would’ve been ideal, which made his/her tragic ending more poignant for me. His/her war would never be over, and only in death, would he/she find peace.

As for the others, I figured they’d died and awoken in Heaven. It was obvious (to me) that the Normandy had been engulfed by the mass relay explosion (I didn’t like that either.) and with me being a Christian, the garden world they crashed on looked like Eden. Garrus and/or Tali had been with my Shepard when he was caught in Harbinger’s beam, so it made sense that they hadn’t survived it and appeared stepping out of the ship after Joker. 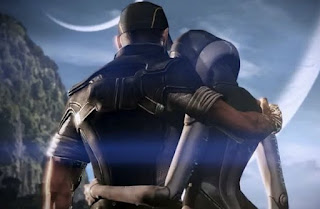 The last thing that really got to me was how the ending always, no matter what, depicted Liara. My Shepard’s romance with her had ended after the Shadow Broker mission in ME2, and my character had started a relationship with Tali after that. So why was my character thinking about Liara?!
But these endings, after five years of devotion and throwing money at this franchise was the equivalent of being stood up at the altar. I believed that Bioware dropped the ball on this one.
And then something strange happened, something I’ve never seen before. Bioware listened to all of us.

In what I believe is an unprecedented move, they told us that they understood our frustration, and they would do their best to make things right. Even better; they wouldn’t charge us for it.
I thought this was an awesome thing for a corporation to do, to actually demonstrate that it valued the opinions of those who kept them in business, and then at least attempt to rectify their error and not make us pay for it.

I was much more satisfied with the new endings than I was with the old. There was more closure, and a validation to the time we’d spent waiting for, and then beating the Reapers. My character actually envisioned his romantic interest in the end. We get to see the mass effect relays repaired and the races rebuild, there’s a touching memorial service for Shepard (and in my case, Anderson), and most importantly, the Normandy is repaired and takes off from the planet on which it crashed.

I understand that some people are okay with a lack of closure with their games, but after playing this series for so long, I wanted to see the repercussions of actions down to the last detail. I invested time and money into the success of this franchise and I wanted—and got—a significant payoff.

The first endings were a letdown. The second endings were not perfect, but they were better than what was originally presented. Plus Bioware gets an A for effort.

That’s just me, though.

FINAL THOUGHT: I'm a romantic at heart. That moment in ME3 when Shepard faced down the Reaper variant on Rannoch, and Tali dropped the L word on him, was one of the best moments in gaming I've ever experienced. 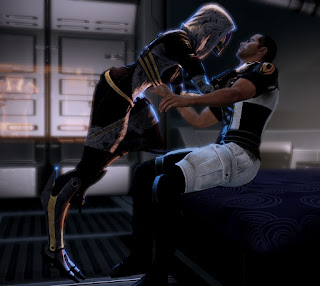