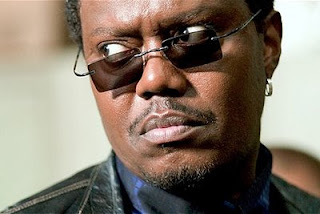 Bernie Mac, man…
I'm not one who usually trips off of celebrity deaths. Heath Ledger died, I was shocked. I got over it in a couple of days, and I was saddened and blown away by his performance in the Dark Knight. We lost a talent too young—but I rarely think about it now.
But a month later, I'm still tripping off the death of Bernie Mac.

It was my girlfriend of all people who told me that he had passed on. I found out a day after it happened and went running to IMDB, and was close to tears, I won't lie.

Put simply, the man was fuckin' funny.
And to be honest, I didn't even really get into him until Spike Lee's "The Original Kings of Comedy" and the first time I saw it, I hadn't laughed that hard since Eddie Murphy. Probably because I got it; I actually used to keep my little hellraiser of a son on a shoulder leash so he wouldn't run off, and I can't tell you how many people gave me dirty looks in the mall or even had the audacity to say something to me. Man, don't tell me how to raise my kids.

And Bernie was right; we all thought it, he just said it. If you haven't seen the act, check it out here.

You know, I'd heard of him through almost all of his bit parts, and I think he had one of the best lines in "Friday" ("The Lord is my shepherd, he know what I want."), but he finally got his breakout through "Kings". After that, he achieved mainstream success, if only for a moment; his show was cancelled suddenly after five seasons with no conclusion.

I think what I admire most about the man was that he, like most of my other heroes, achieved success on his own terms. Bernie was as warm as he was brash, he said exactly what was on his mind and he didn't give a good damn what anyone else thought—and he still made it.

I get both praised and criticized because I'll often say what's on my mind regardless of consequence, and I worry sometimes that it will be detrimental to my own success. I just don't bow down. I spent enough of my life fighting off people who tried to change me into what they thought I should be. For better or for worse, this is who I am. I'm thirty-one years old I'm still struggling to find my place, but not I'm not gonna change who I am.

But then again, how do you define success?
I say it's when you succeed at your endeavors while remaining true to yourself.
That's why Bernie Mac's death hit me so hard; he did it. He stayed exactly who he was over the years and he still made it.

I find hope in that.
So, thanks, Mac. You're an inspiration and you are greatly missed.